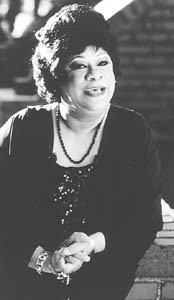 Obstacle Course: Ruth Brown manages to overcome just about anything.

She’s a fighter. In the late ’40s and early ’50s, a 20-year-old singer named Ruth Brown, known as “Miss Rhythm,” skyrocketed to the top of the R&B charts with “Teardrops in My Eyes” and other hits. She earned millions for her bosses at Atlantic Records with the label’s first 45 rpm single, leading industry insiders to dub the New York-based offices “the house that Ruth built.”

Atlantic Records went on to record Aretha Franklin, Wilson Pickett, and other top acts. Brown, denied royalties, slipped into near poverty, working for a while as domestic help. In 1986 she sued the giant label, eventually winning the royalty dispute in a landmark decision that created the Rhythm and Blues Foundation, a charitable organization that provides hospitalization and other benefits to pioneers of the genre.

Yet Brown’s biggest fight still lay ahead. Two years ago, she was stricken with a debilitating stroke that left the singer voiceless. Concerts were canceled, and many predicted that the Grammy-winning performer was silenced for good.

Brown fought back. After a lengthy round of speech therapy (and no small amount of prayer), she’s back onstage and singing limited engagements. Brown travels this weekend to the Russian River Blues Festival, where she will host an all-star lineup of W. C. Handy Blues Award winners. It is perhaps the greatest comeback from a performer who has racked up an impressive list of accomplishments.

“In my mind, I didn’t know what in the world I had done to deserve that stroke,” she says, during a phone interview from her Las Vegas home. “I mean, my voice is my livelihood.”

During the interview, Brown struggles occasionally to find the right word, but her speech is remarkably lucid, her mind sharp, and her humor still intact.

As always, Brown’s spirit is unflagging. “All I can say is thank God for this recovery, because I want to start somewhere again,” she adds. “This is all I’ve known.”

Brown, 74, is a soul survivor. Born Ruth Alston Weston, she styled her singing after her idols Dinah Washington and Sarah Vaughan. She was discovered by Duke Ellington in a small Washington, D.C., nightclub in 1948. A friend of Ellington’s set up an audition with Ahmet Ertegun, the chief at then-fledgling Atlantic Records. En route to the audition at the Apollo Theater in New York, Brown was seriously injured in a car crash and hospitalized for nine months.

Eighteen months later, she stood on crutches to record “So Long,” an old Russ Morgan ballad, backed by an Atlantic Records all-star jazz band assembled by guitarist Eddie Condron. The song was a sensation and it made Brown a star. She became one of the premiere recording artists of the ’50s, with five No. 1 hits, including “(Mama) He treats Your Daughter Mean” and “5-10-15 Hours.”

Since then Brown has recorded more than 80 albums. Her credits include several million-selling hits, induction into the Rock and Roll Hall of Fame, a Grammy Award, two W. C. Handy Awards (last month Brown was inducted into the Blues Hall of Fame), a Tony Award (for best actress in the 1987 musical Black and Blue), the Ralph Gleason Award for Music Journalism (for her 1996 autobiography A Good Day to Sing the Blues), and a Pioneer Award from the Rhythm and Blues Foundation.

These days, Brown–who now lives in a Las Vegas retirement community nicknamed “God’s waiting room”–is unfazed by her brushes with mortality. “I’ve been to the gate a whole lotta times and they turned me around and said, ‘Go back, you’re not ready yet.’ Sometimes I wonder how long my luck will hold out,” she adds with a laugh.

“My philosophy is, live for today because we don’t know about tomorrow. The older I get, the more I realize how true that statement is. Life is precious, no doubt about it.”