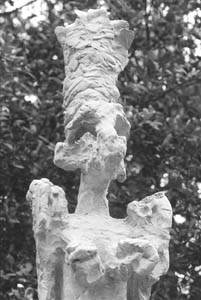 “New Ceramic Horizons,” a Who’s Who of West Coast ceramicists showing through January at the Paradise Ridge Sculpture Grove, offers nothing one might wish to eat ice cream from, dishware being the first thing the word “pottery” springs to mind. Instead of cherry chip, the clay sculptures collected here warn of environmental catastrophe, invite interspecies harmony, create their own cultures, or simply exist as mysterious artifacts hanging from the trees and scattered carelessly through the woods.

Curated by the mono-monikered Guerneville artist Harley, “New Ceramic Horizons” features the cream of the California College of Arts and Crafts Oakland faculty, a number of their more stellar graduates, and other rising stars. Now in its seventh year, the Paradise Ridge Winery “gallery”–a stand of old oaks and fragrant bay trees covering four acres–often presents work intended to change during the rain-and-sun rigors of the year or to blend with the elements.

Working this time from the premise that from the elements of the earth so to the earth it returns, the latest exhibit examines exactly how malleable clay really is as 10 different artists use it in 10 wildly different ways.

Santa Rosa sculptor Penny Michel stands appraisingly in front of her own contribution, Tribe. A selection of 12 figures, Tribe features 10 tall, spindly, humanlike poles of clay–breasts and headdresses and slight hip swivels defining their species–set on one side of the grove’s main path, with two standing apart on the other. “I like the idea of some of them being outsiders,” she explains, looking with a certain sympathy at her own outcasts. Born in North Africa, Michel admits to being continuously drawn to the indigenous work of Mesopotamia, working her own pieces to create a sense of the ancient.

Hedi-Katharina Ernst, a Swiss-German artist, dominates the westernmost section of the grove. She fashions mammoth Soul Heads, cleanly sheared off directly above the nose and placed on tall metal stands to tower over the visitor. On the ground she’s set more heads, primitive and fiercely dignified.

John Toki, a CCAC core faculty member, literally wrote the book on ceramics, co-authoring Hands in Clay, a required text for most first-year art students. Toki is interested in crafting commemorative works and examining how such modern totems convey power and prompt response. His Blue Stance is one example, standing alone on a clean spread of gravel, reaching some 10 feet in the air, a technical marvel of glaze interplay and plain old how’d-he-do-it amazement.

On the east side of the grove, Scott Parady places huge biomorphic forms off the ground on railroad ties. In the heat of the day, the tar of the ties begins to soften and stink, adding to the sense of creepy unease off-gassing from Parady’s half-human-made, half-ruined sculptures–which are partially made on the traditional potter’s wheel and then lugged off with help to be folded and fired.

Clara Lanyi manages to attract and repel with her Feast of the Open Spores, a gorgeously smooth, glazed piece that nonetheless conveys a cancerous hunger. Guerneville printmaker Inya Laskowski combines satisfyingly thick rectangular clay slabs with triangulated ends, like those made when an iron scorches a shirt, and hangs them from the trees in Implements of Cultural Decay.

Dharma Strasser and Re-Cheng Tsang each bring it down to the ground, Strasser creating some 20 delicately colored “rocks” nestled in a mossy corner for Migration. Tsang has the center of the grove, where she has wrought a strangely merry air by scattering hundreds of small ceramic balls, softly glazed with a milky white-blue all through the grass (Wanderlust).

Sarah Kotzamani invites viewers to embrace scientist Edward O. Wilson’s injunction that human beings need other species for continued survival in Biophilia, featuring half-human, half-animal figures in elegant static dance. And Graton artist Christiane Vincent, who works with found objects, searched around to discover 21 terra cotta ovals that hold nothing and indeed can’t even be accessed for Breaking the Rules.

But as all the artists collected in “New Ceramic Horizons” seem to embrace, there are no rules to break. Mutable and fluid, clay’s horizons are endless.