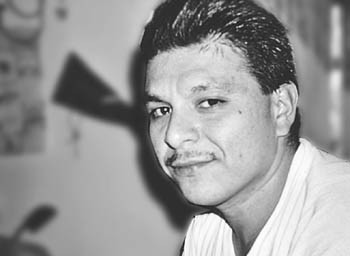 Is It Safe? Angel Sanchez’s tooth trouble began with a little pain in his molar.

Getting a good dentist in jail is like pulling teeth

Angel Sanchez is learning at least two important lessons during his present stay at the Sonoma County Jail. One: crime doesn’t pay. Two: it can also hurt a hell of a lot.

For Sanchez, 30, the pain began in one of his upper-right molars shortly after he was jailed on charges of drunk and disorderly conduct, resisting arrest, and assaulting a police officer Feb. 28, and two months and two pulled teeth later, it still hasn’t let up.

Sanchez and his wife, Marlene, 45, allege that it’s because of inadequate medical treatment Angel has received since he’s been in custody. According to Sanchez’s medical records, that treatment included the prescription of a medication to which Sanchez is allergic and a difficult molar extraction that may have resulted in a perforated sinus cavity. In an interview at the jail June 7, Sanchez, who was on parole at the time of his arrest, claimed he is still in pain and that jail medical staff are refusing to provide him with adequate pain medication.

Sonoma County Jail officials acknowledge the mistake in Sanchez’s medication but also suggest that the inmate is playing up his pain in order to gain access to stronger medication, a behavior known as “med seeking.”

“We have taken the Sanchezes’ complaints very seriously,” said Assistant Sheriff Mike Costa, who oversees the Sonoma County Jail. Costa confirmed that Sanchez had been prescribed a medication that medical staff should have known he was allergic to but added that otherwise the inmate is receiving “the best medical treatment he’s had in his life.”

Costa’s statement may not be that far off the mark. Like many of the inmates at the jail, Sanchez has no medical insurance. Many inmates have illnesses that remain untreated until they get behind bars.

“It’s a difficult system to work in,” said Elaine Hustedt, vice president of operations and personnel for California Forensic Medical Group Inc., the Monterey-based company that provides medical services at the jail. “Inmates don’t come into jail with their entire medical records.” She said that Sanchez’s complaint would soon be evaluated by the firm’s quality assurance department, a regular process by which all such complaints are examined.

Forensic Medical took over medical services at the jail two years ago. Care had previously been provided by St. Louis-based Correctional Medical Services, which lost its California Medical Association accreditation and ultimately its contract with Sonoma County after a half-dozen inmates died while in custody during an 18-month span, as reported in the Sonoma County Independent in 1998. Hustedt pointed out that unlike Correctional Medical Services, Forensic Medical is fully accredited by the CMA. Last year the Sonoma County Grand Jury found that Forensic Medical had made numerous improvements at the facility since taking over medical services.

Inmates at the jail receive a prebooking medical and mental-health screening once they are taken into custody. On his screening form, Sanchez noted that he was allergic to aspirin. His medical records at the jail indicate that after complaining about pain in an upper right molar, he was prescribed Disalcid, a medication that is not recommended to patients who are allergic to aspirin. After several days, Sanchez began experiencing a rash accompanied by itching–a possible allergic reaction to Disalcid. Medical staff prescribed hydrocortisone cream for the itching instead of discontinuing the Disalcid, medical records indicate.

Sanchez found the Disalcid ineffective, and the pain in his mouth continued. On March 27, a Forensic Medical dentist performed what was supposed to be a simple extraction of a right molar. “It felt like he was trying to break my neck,” Sanchez recalled. “It felt like he was trying to rip my mouth open wider. . . . After quite some time, I heard a big crack inside my mouth.” The pulled tooth was placed in a dish in front of Sanchez. It was attached to what he described as “a bloody, nickel-sized chunk of bone” that had broken off his jaw during the extraction. Subsequent examinations, including a second opinion from a private oral surgeon, have found that Sanchez’s sinus cavity may have been perforated, a risk associated with the procedure.

Sanchez was given a codeine-based pain reliever immediately after the extraction. After the swelling went down, he was placed once again on Disalcid, even though he continued to complain about pain and itching. According to medical records, Sanchez was admitted to the jail infirmary on April 21 for difficulty with breathing, another potential symptom of Disalcid allergy. Marlene, who discovered the potential allergy on the Internet, had notified jail medical staff about it the previous day. The medication was discontinued and the symptoms began to subside.

On April 23, a Forensic Medical oral surgeon performed a second extraction on Sanchez and smoothed out the inmate’s jawbone. Sanchez was initially prescribed a codeine-based pain medication after that procedure but was downgraded to Tylenol despite repeated requests to medical staff for stronger medication. Medical staff accused Sanchez of “medication seeking” behavior. He continues to complain of severe pain in the area.

The Sanchezes have filed a claim against Sonoma County and are considering filing a medical malpractice lawsuit against California Forensic Medical Group. Assistant Sheriff Costa is confident that the outcome of any inquiry will be favorable. “One reason why we have to take such complaints so seriously is because we have deep pockets,” Costa said. “We are an easy mark for people to sue.”

In the meantime, Angel Sanchez claims he’s still in pain. He looks forward to settling his legal matters in Sonoma County so he can be transferred to San Quentin prison for a parole violation. From previous experience, he’s found the medical care there more to his liking.