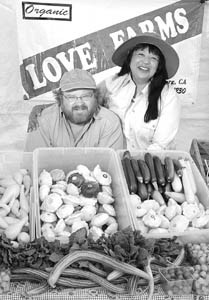 Good Vibes: Ron Love and Norma Novoa of Love Farms put a background in engineering to work on their produce.

Love Is All You Need

Norma Novoa is talking about how she gives all her houseplants names and considers them pets, and Ron Love starts fidgeting about in his chair again.

Love was an electrical engineer before he turned to organic farming. He’s from the East Coast, for chrissakes. And engineers from Pennsylvania do not go around giving their plants names. But here’s his partner of five years talking about this odd behavior–talking about it to a reporter no less.

He knows this kind of talk inspires raised eyebrows in much of society. So who can blame him from keeping an arm’s length away from the hippy-dippy, Northern California stereotype? He has a business to run. He’s the owner of Love Farms in Healdsburg, and his customers entrust him with their bodies and health. And he’s not so sure that naming houseplants inspires that kind of confidence.

On the other hand, he has no qualms talking about how plants have a consciousness and how they can sense our feelings and respond to our emotional world. After all, these ideas were not inspired by living in groovy Northern California. These beliefs are the products of years of research and experimentation, including over 10 years of work and schooling as an electrical engineer.

“Electrical engineering is child’s play compared to farming,” he says. “But it was a good training ground.”

Working with electronics gave Love a good deal of understanding–and a great deal of appreciation–for the waves, vibrations, and other invisible forces that play a huge role in life. So when he talks about farming, he mentions ideas such as plants sensing a person’s vibrations and how the intent of the farmer manifests itself in the taste of the food.

The theory goes that as farmers step into the field and take care of the plants and respond to their needs, they fall in sync with nature’s vibrations. The plants, in turn, respond to farmers’ harmonious vibes by growing in such a way that the food they produce is nutritious and delicious for humans. But you can’t fool Mother Nature. If farmers don’t have the intent to fall into this peaceful synchronization, the plants will respond accordingly to those vibes as well. And if there’s hardly any human interaction, as is the case in much of the agricultural industry, then you get the bland, empty food usually found in most supermarkets.

Love is committed to being the type of farmer who provides others with nutritious and tasty food. “That’s my service as a human,” he says. But he also gets an intellectual kick out of the whole process too.

Curious about the world, he always wondered, How does that work? He was the type of kid who took apart machines just to see what was going on in there. That was fun for a while. Then he discovered electronics, which was something he could really wrap his brain around. And then came Pong. Love still remembers standing in line at his local Sears to play the first-ever video game. The seeds for a future in electrical engineering were sown.

He enjoyed the career. He fiddled with robotics and tinkered with designing protection from electromagnetic waves. But his mind was craving more. And one question that kept popping into it was, What about the food?

It was such a basic yet all-encompassing question. How do we consume light and life, he wondered. How does that work?

Eventually he started a composting business and studied soil for three years. After that, he went back to engineering and accepted a job with Optical Coating Laboratory in Santa Rosa. When asked why he switched careers again, Love replies that composting was the first phase of his education and perhaps he needed some time to assimilate what he learned.

But Novoa chimes in, “He needed to go to OCLI to meet me.” It was his destiny, she says. Novoa has no hesitations about naming plants or talking about destiny. She’s from Marin. Plus, she’s of Native American heritage and is a shaman, she adds.

Novoa explains that when Love was promoted at OCLI, she was hired to replace him. As he was training her, the two got to know each other. “All he ever talked about was farming, farming, farming,” she says. His ideas struck a chord with her. But she still seems surprised that this way of thinking is even considered an idea. For her, it was simply a given that people and plants coexist in an emotional relationship. That so-called idea was just an inherent part of her life.

After about six months, Love and Novoa quit their jobs together and started farming. In addition to running a produce stand at the farm, they also sell at nearby farmers markets. What really excites them is talking to the customers, educating them, and inspiring them to try their hand at growing some plants themselves.

“Even if you plant just a few things, you receive a lot of the benefit,” Love says. “Gardening leads us back into ourselves, back to our natural vibration. And it’s really important to expose kids to it, so that they can always come back to that connection, that buzz with nature.”

To that end, Love and Novoa lead school groups through their farm. And they’re helping coordinate the construction of a greenhouse and garden at Healdsburg Junior High School. “I’m hoping to get some companies to donate materials to the project,” Love says. For example, he thinks the school–and everyone–could benefit from using a system of drip irrigation and plastic sheeting, developed in the deserts of the Middle East. The combination keeps the moisture in the soil and the bugs and weeds out. “It really promotes the plants and allows you to grow most of the year,” he says. That system, along with the North Bay climate, could “allow this area to be a self-contained, closed circle,” Love adds. “This is the perfect spot to practice sustainable farming.”

If it was destiny that brought Love to OCLI, then surely it must have been destiny that brought him to this “perfect spot.” Love was standing in line for Grateful Dead tickets back East and started talking with the people next to him. They said he could crash at their place if he ever decided to check out the Bay Area. So he came.

With that, the conversation between Love and Novoa turns to the Grateful Dead. Love contends that their concerts were much more powerful on the East Coast because they brought with them such a different ethos. That dramatic difference was exhilarating and served as an inspiration. “Ah,” counters Novoa, “that’s exactly why their shows were more powerful here.” Their message was just an inherent part of life here that everyone took for granted, and that made it all the more potent.

And they banter back and forth, on and on, as they do about so many topics. Until finally Love realizes how “groovy” this conversation must sound to outside ears. He fidgets about in his chair a bit and mumbles, “Oh, great.” And then he sits back, shrugs, and just gives a big smile.

Love Farms is located at 15069 Grove St. in Healdsburg. The produce stand is open 10am-6pm, Monday-Friday; 10am-4pm Saturday-Sunday. They are also at the Healdsburg, Santa Rosa, and Sebastopol farmers markets.