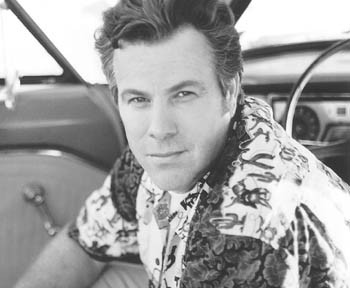 Keen on You: Robert Earl Keen honed his skills with schoolmates like Lyle Lovett.

A Life in Song

You’re sitting around a campfire somewhere in the West as an old cowboy with a dusty hat and a missing thumb tells you a high tale of surly characters he’s encountered throughout his rugged life. He leans into each word while you sit on the edge of your log glued to his every motion and utterance.

That’s kind of what it’s like to listen to a Robert Earl Keen song.

Keen, who performs Friday, June 21, at the Mystic Theatre, is arguably the top Texas singer-songwriter on the road today. His songs conjure up vivid images of characters that would fit right into that cowboy’s tall tale, but he also sings about people we all know.

“There’s a lot of rural settings, but I don’t always consider them rural,” Keen says. “I just consider them down and out. Sometimes, it’s actually the loser who makes out and does well in the end. That’s one of my favorite themes. People relate to that theme. Also, people relate to the fact that life is a mess, and I particularly strive to describe what kind of mess it is.”

On his latest release, Gravitational Forces (Lost Highway), Keen paints a familiar canvas of such messes. “It’s a perfect mirror of my personal life,” he admits.

It’s easy to see Keen in some of these characters but not all. On the disc’s catchy opening track, “My Home Ain’t in the Hall of Fame,” he claims to be a “highway bum” with a “sunburned thumb.” It doesn’t take much imagination to visualize this as Keen, whose most famous song is “The Road Goes on Forever” with its catch phrase “and the party never ends.” On the other hand, few fans want to think of Keen as one of the adulterous faux lovebirds in “High Plains Jamboree,” who seem to disregard the good life at home while they dance together in the motel lounge.

As good as any songwriting technician on the scene today, Keen perfected his craft at the University of Texas A&M. His songsmithing skills were honed not necessarily in any class, but on his porch with friends and fellow Aggies like Lyle Lovett. Keen maintains a deep admiration for Lovett, but not all of his college songwriting buddies draw such praise.

“I had a few friends who thought because they knew you so well or the fact that they were privy to your life, that gave them access to write about your life or use you as the subject matter or use some activity that you had done as the subject matter to their song,” Keen says. “I had been the butt of that a few times, and I don’t like it. In the first place it’s lazy. In the second place, it’s chicken shit. It’s cowardly. So I really try to stay away from that. You can’t always help it, sometimes there’s that personal joke or maybe you want to make a jab at somebody just to tease ’em a little bit. Number one, I don’t use it very much. And number two, I try not to be cruel about it.”

As an example, Keen has a song called “I’m Comin’ Home” in which he sings about a character named Sleepy John, who in real life is Santa Cruz music promoter John Sandidge. “He loves being in that tune,” Keen says about Sandidge. “The greatest thing about that is Todd Snider’s ‘Beer Run’ song. The characters that Todd has in his song say that they’ve met this old hippie named Sleepy John that claimed to be the guy from the Robert Earl song.

“That’s like Steven Spielberg putting his own references to his own movies. I love that kind of inside humor. But then again, that particular description is a very nice description. There’s nothing but flattery there. Everybody’s happy with that.”

By contrast, Keen says his reference to his sister in “Merry Christmas from the Family” (which was covered by the Dixie Chicks) was possibly a step over the line. “She never said so, but I’m almost positive she was offended,” Keen admits. “And the fact was, it was actually another family member in another place, but it worked better for my sister to be there. She didn’t like the fact that it was implied that she was that character because that really wasn’t her. But it worked better for the song.

“Fiction is very forgiving,” he points out. “That’s the magic of it.”

Keen may have picked up this penchant for fiction from his college days, but none of his college professors explained the concept quite as clearly or eloquently as writer Charles Bukowski.

“There’s a great passage,” he says, “in the first couple of chapters in what I think is Charles Bukowski’s best book, Ham on Rye. It’s a great little story about when he was a child, the president was coming through town, and they were instructed as a class to go to the parade and then on Monday morning to write about it and turn it in for a grade. Of course, Bukowski, being who he is, didn’t go. He was drinking lemonade and wine probably. He was 10 or 11 years old.

“So he didn’t go to the parade, but he sat down and wrote this story about the parade and it was the best one, and they had him come to the front of the class and read the story. Everyone who listened believed that he had been there. And he says at the end of this particular chapter, ‘That’s when I found out all they want are beautiful lies.’

“That, I think, is really the goal: the beautiful lie. If you stick too closely to real characters, sometimes their flaws or lack of flaws will interrupt your momentum as far as your narrative and you’ll be a little guarded about what you say.”

Keen says he has one place in particular where he tends to find more inspiration than others, and it’s not where you might think. “I find a lot more topics at home [than on the road],” he says. “The road is very, very tunnel-like. It has very few new experiences waiting for you. You get in the bus or plane or train or whatever vehicle, and you go to the gig and you do the sound check and the sound checks are very similar and the rooms are very similar. The people and the attitudes are very similar.”

Though a regular on the tour circuit throughout the United States, Keen rarely goes on the lengthy megatours preferred by others.

“I have some rules about it,” he explains. “I don’t go out for more than three weeks. I always allow band members to take off for any kind of family obligation or crisis. I’m not a dictator. I’m a bandleader. I try to keep the band real happy. For the most part, we try to do it in moderation. I have overdone it in the past. It will affect you. You just get short-tempered and tired and your judgment goes out the window. All of a sudden you have a few bad experiences in a row, and it can come unglued. It’s a lot better to have some rules about it and stick to ’em. People are always trying to make you break ’em anyway.

“If you do your tours right and you’re working like we work, which is really trying to get out there and play to as many people as possible and get back home, you don’t leave much time for experimentation and just wandering around and learning about the town. I used to do a lot more hanging out. It was a lot more fun and you saw a lot more things, and you certainly got a lot more of the picture. This touring the way most people tour with bands is too tight.”

Now married with two girls waiting at home, it’s understandable that Keen may not revel in the luxuries of the road as he once did. As his most famous song says, “The road goes on forever”–but has the party actually ended?

“The party slows down sometimes,” the 45-year-old Keen says. “It never really ends, but it has fallen down on one knee and had to catch its breath.”