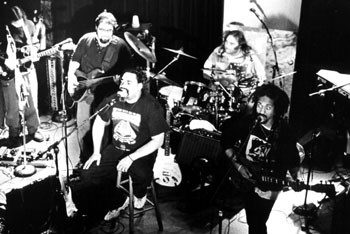 Iconizing An Iconoclast: Project/Object pays tribute to the king of the mavericks.

It started, fittingly enough, at a basement jam session. As an homage to Frank Zappa–the late avant-rock singer, guitarist, composer, arranger, and bandleader who died in 1993 after a bout with prostate cancer–a few fans began gathering each year as the loose-knit band Project/Object to mark the anniversary of Zappa’s birth, not unlike the garage-band characters in Zappa’s epic 1979 three-part rock opera, Joe’s Garage.

“A few of the guys and their friends started saying, ‘Hey, this isn’t too bad, you guys should consider taking this on the road,'” recalls singer and guitarist Ike Willis, who had performed and recorded on and off for 17 years with Zappa. “Five years ago, on the day I returned from Israel after performing Zappa songs with a chamber orchestra, [singer and guitarist] Andre Cholmondeley invited me to join Project/Object, and the rest, as they say, is history. I saw this as the best way to keep the music alive, which is what Frank wanted.”

The band–which last year released a live CD and is now on tour with both Willis and Brock–has garnered rave reviews playing covers from all periods of Zappa’s long career. “We treat the music as faithfully as we can,” says Willis, during a phone interview from his Portland home.

There’s no shortage of music from which to choose. Zappa recorded some 60 albums (a few released posthumously), whose songs ran from doo-wop parodies to complex jazz fusion to Edgar Varèse-inspired classical works. Along the way, his bands served as a training ground for some of rock’s best musicians, including guitarists Steve Vai and Adrian Belew, and drummer Terry Bozzio.

An astute collector of ’50s rock and roll and a fan of such modern classical composers as Stockhausen, Stravinsky, and Varèse, Zappa had an early group with Don Van Vliet (whom he dubbed Captain Beefheart), played in a cocktail lounge band, scored a B-movie, got arrested for selling a fake stag-party audio tape to an undercover vice cop, and performed a bicycle concerto on The Steve Allen Show (plucking the spokes and blowing through the handlebars).

And that was all before creating the satirical Mothers of Invention, the eclectic band that railed against conformity and consumer consumption. The band’s double-LP debut, 1966’s Freak Out!, featured biting social commentary (“Trouble Every Day”), pokes at the emerging youth culture (“The Return of the Son of Monster Magnet”), and a bleak sci-fi cautionary tale (“Who Are the Brain Police?”).

Zappa went on to satirize the Beatles (We’re Only in It for the Money), perform the score of his 200 Motels in concert with Zubin Mehta and the Los Angeles Philharmonic, championed free speech after the B’Nai B’rith Anti-Defamation League filed a complaint with the FCC over his song “Jewish Princess,” scored a Top 40 hit with 1982’s “Valley Girl,” and testified before Congress in opposition to Tipper Gore and other advocates of warning labels on recordings. (He later released an album titled Frank Zappa Meets the Mothers of Prevention in their honor.)

“A lot of people think he must have been a really insane guy,” Willis says of Zappa, “but, no, he was a great guy. Very gentle. A great sense of humor, a bent sense of humor. And incredibly intelligent, especially in terms of composition.”

Those compositions, while rigidly structured, lent themselves to the kind of improvisation that gave the songs a life of their own in concert. “We could be in Wisconsin or Minnesota or New Mexico playing the same song, but based on the tenor of the audience or the weather or whether somebody had stubbed their toe in the bathtub that morning, every night would be different,” Willis says. “Same song, same arrangement, but the music always had the X-factor going for it.”

Project/Object, Willis adds, operates in that same spirit. “I’m doing the same thing that I’ve been doing for the last 25 years: I walk onstage, plug in my guitar, and perform the same songs,” he says, “but there’s still room for me to stretch out. The only difference is that Frank isn’t here to enjoy it too.”