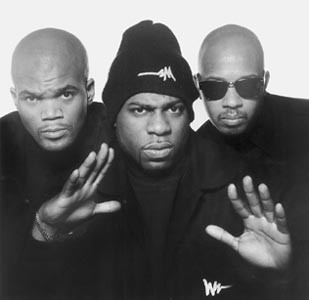 After scaling personal and professional tribulations, Run-D.M.C are back in black

HELLO, PORKPIE HATS. Five years after their last album, the Christian-inspired Down with the King, rap legends Run-D.M.C. are, as Lifestyle of the Rich and Famous host Robin Leach might intone (loudly), on an upward swing! They’re on tour. They’re the recipients of a recent MTV lifetime-achievement award and the subject of an appreciative rockumentary (or is that rapumentary?). New-school hip-hoppers are rushing to pay tribute to the Kings of Rock–last year, the Wu-Tang Clan covered the Run-D.M.C. classic “Sucker MCs.” And a new album is in the works.

“It’s like town to town, spot to spot, a hop, a skip, and a jump one night in each town and then we’re back on the road,” observes group member Darryl McDaniels, 33, during a phone call from a Brooklyn hotel room. “It’s a really busy time for us. We were just buggin’ out the other day, saying we can’t believe how many shows we’ve got booked.

“This is the busiest we’ve been since the Raisin’ Hell tour.”

For those who think the history of hip-hop began with the ubiquitous–and unabashedly commercial–Puff Daddy, that re-emergence is significant. After all, Run-D.M.C.–McDaniels, boyhood chum Joey Simmons, and basketball buddy Jay Mizell (aka Jam Master Jay)–helped change the course of popular music, introducing porkpie hats, gold chains, and untied sneakers, as Rolling Stone once noted, to youth culture’s most stubborn demographic group: white, male, suburban rock fans.

“We want hip-hop to be an everlasting, eternal music–it’s not going to be a ‘remember when?’ kind of thing.”

Fame found Run-D.M.C. in 1986 with the release of Raising Hell, the third LP from this Queens, New York­based rap trio. In a brainstorm by record producer Rick Rubin, the group recorded a mind-bending rock ‘n’ rap cover of Aerosmith’s ’70s-rock hit “Walk This Way.”

The track–hailed by the music press as one of the cleverest marketing schemes ever–confirmed the group’s self-professed King of Rock status, sent suburban metalheads jumping for their air guitars, and revitalized the flaccid career of Aerosmith, then a washed-up Rolling Stones clone.

The album sold 5 million copies, became the first rap album to hit the Billboard Top 10 album chart (it peaked at No. 8) and earn multiple platinum status, earned corporate sponsorships from Adidas, and paved the way for a whole generation of new-school rappers.

THESE DAYS, in a genre known for its youth orientation and experimentation with state-of-the-art technology, Run-D.M.C are the elder statesmen of hip-hop. “Since the death of the so-called gangsta rap and the materialism of Puff Daddy, people are looking back to the old way of deejaying, rhyming, and having a good time,” says McDaniels.

“Ya know what I’m sayin’? People are getting back to the foundation of hip-hop.

That’s a story in itself. After all, Run-D.M.C. may have taken hardcore hip-hop from an underground street sensation to a pop-culture phenomenon, but it was a bumpy ride. Raised in the middle-class neighborhood of Hollis, Queens, by the time Joey Simmons had reached his teens, older brother Russell already had achieved success on the local rap scene. One year out of high school, the younger Simmons and his pals recorded a groundbreaking single, “It’s Like That,” backed with “Suckers MCs.”

The platter spotlighted the group’s unconventional singing style in which, rather than trade off verses, Simmons and McDaniels finish each other’s lines. The single hit No. 15 on the R&B charts.

Their eponymous 1984 debut album established their trademark rock influences, virtually unheard of in the jazz- and R&B-influenced world of rap. By the time Raising Hell cracked the Top 10, Run-D.M.C. had starred in the movie Krush Groove–alongside Kurtis Blow, the Fat Boys, and the Beastie Boys–and opened the commercial floodgate to rap.

But success took its toll. Both Simmons and McDaniels battled drug abuse and alcohol problems, and a rape charge (later dropped) dogged Simmons. Tougher than Leather, the much-anticipated 1988 follow-up to Raising Hell, reached No. 9 on the pop charts, but proved a critical failure. Back from Hell, released in 1990, was their first album not to go gold.

“It was unavoidable that we go through the basic sex, drugs, and rock ‘n’ roll thing,” McDaniels says. “That’s out here in this career. Some don’t survive it, some do. Those that do survive can be an example for those that follow.

“We don’t want to preach, but we do want to set an example.”

Certainly, the list of rappers who have fallen by the wayside–sometimes in a hail of bullets–is legion: NWA, M.C. Hammer, Vanilla Ice, the Notorious BIG, 2Pac. “We’re still here because we hold the essence of what the real hip-hop is: fun, a positive message, a good time, rock the crowd, rap, break dance, spin on your head, jump into the audience,” McDaniels adds.

“All that stuff is all good.