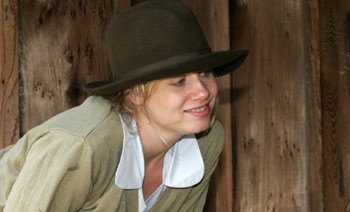 Washed-Away Bride: Molly Bell portrays one side of the adventurous Bessie.

‘Audacious” might not be too strong a word to describe any playwright attempting a staged recreation of the real-life Colorado River journey and unsolved 1928 disappearance of Glen and Bessie Hyde. Playwright Cheryl Coons is indeed audacious enough to take an epic story that covers hundreds of miles, is set within the mind-boggling enormity of the Grand Canyon and has no clear-cut ending, and turn it into a piece of theater set on a land-locked indoor stage. But add to that Chuck Larkin’s compositions, make the thing a musical and, furthermore, have two conflicting versions of the story take place onstage at the same time, with two sets of actors simultaneously playing the Hydes–well, that’s pretty damn audacious.

There is perhaps no better word than “audacious” to describe the honeymooning Hydes themselves, newlyweds who, in the same year that women were first allowed to compete in the Olympics and Amelia Earhart flew her plane across the Atlantic Ocean, set out to make Bessie the first woman to ever run the treacherous Colorado River. Their ill-fated journey, in a homemade wooden scow built by Glen, made them famous as soon as their trip began; their sudden vanishing act, less than 20 miles from the end of the voyage, has had river guides, theorists and mystery-hunters guessing for nearly 80 years.

With River’s End, a world premiere, Mill Valley’s Marin Theatre Company launch their 2005–2006 season, one that will include two other world premieres, one of which (the upcoming Mark Twain–inspired Splittin’ the Raft) also conjures a famous, though fictional, river trip. If those efforts are half as surprising, daring, inventive and moving as River’s End, then this could turn out to be one of MTC’s best seasons in years.

Two seasoned river guides, Kent (local favorite J. D. Nelson) and Georgie (the electrifying Lucinda Hitchcock Cone), lay out several of the more popular theories as to what took place in a rousing opening song (the tension-building “Only the River Knows”), taking turns telling their favorite versions of the story and occasionally invading the action as the highly adaptable Nelson and Cone take on other characters throughout the show.

As Glen and Bessie One, the strong-voiced John Patrick Moore and a fiery Molly Bell play the Hydes as adorably amorous (if slightly reckless) adventurers, their Grand Canyon honeymoon trip spurred largely by the gung-ho Bessie–a former showgirl with a potentially marriage-destroying secret–and her dreams of fame and fortune.

The other Hydes–Glen and Bessie Two–are a different story. Glen Two (played by Travis Poelle with the right sense of potential menace) cajoles and connives Bessie Two (a convincingly beaten-down Dani Marcus) into making the trip, despite her constant pleas to let her turn back.

Giulio Perrone’s atmospheric set is a stunner. Twin sections of wooden raft jut out from slabs of red rock and a riverbank of real sand. The background resembles massive, layered beds of red rock, framed on either side of the stage by ominous pillars of faux wind-carved limestone. The tight three-piece orchestra, led by composer Chuck Larkin on piano, is tucked away but visible behind an upstage tuft of grass and rock.

Throughout the play, the music–all complicated rhythms and flowing, rapidly shifting melodies–takes the metaphorical place of the unseen river, and when the tension builds in the second act, as the mysteries stack up and the four Hydes draw nearer to their alternate fates, the music adds much to the action. The biggest surprise of River’s End is the emotional power of the final few scenes, when everything slides into place like pieces of a jigsaw puzzle, a couple of major twists are revealed and playwright Coons reveals her own deeply personal take on the Hyde’s epic journey. To Coons, regardless of whatever actually happened to Glen and Bessie, this is a love story, and as staged by MTC, it is an unexpectedly moving one. Like the mighty, mysterious Colorado, River’s End is alternately frightening and beautiful, and has a way of taking us under when we least expect it.