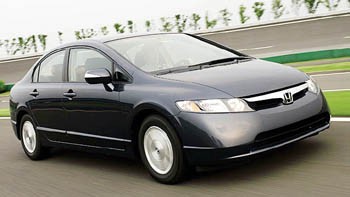 The future of cars today

Oh boy, hot week for yours truly. Drove a $2 million car, drag-raced through the streets of San Francisco in a hybrid SUV and used a biodegradable spoon to stir my coffee. All of this was possible because of the Sierra Club, which hosted its first-ever National Environmental Convention and Expo this past weekend in San Francisco. Cars and the Sierra Club? Strange bedfellows indeed, but these weren’t the ordinary Fords, Toyotas and Hondas; these were the alternative models.

First, I witnessed the unveiling of the 2006 Mercury Mariner Hybrid at the Ford booth. We were told that the SUV–an upscale version of the Ford Escape–had been made available on the Internet before its fall debut date, and the company had sold 800 vehicles already. Ford also had its director of sustainable business strategies, Steven Hunter, on-hand.

Hunter told us the three keys to getting good fuel mileage in a hybrid: (1) accelerate at a moderate pace–don’t floor it if you want to save fuel; (2) keep the speed at a steady state–don’t slow down then speed up; and (3), because the engine “feeds” off the braking, start braking early, give yourself plenty of room to come to a stop. Now you don’t need to go to any of those hybrid fuel-economy clinics coming this fall.

In a move that seems silly and off-key is the Mercury Mariner MyDrive Game, which supposedly will teach people how to drive their Mariner the most efficient way possible. It’s at www.marinerhybrid.com–but who’s going to play that game while Grand Theft Auto is around?

Next up on the press junket was Honda. There, with surprisingly little fanfare, a sheet was pulled off the 2006 model of the Honda Civic Hybrid. It was all low-slung and shimmery. Spokesman Gunner Lindstrom spoke with a cute German accent about Honda’s eco-offerings, which also included the FCX fuel cell car and a compressed natural gas (CNG) Civic GX that was being “filled” by a Phill Natural Gas home pumping station.

The Phill “home refueling appliance” has its appeals. First of all, it looks like a heart defibrillator, which will impress your friends. Second, you could lease one of these and never go to a gas station again. Honda’s plan for the future is clear: they want to develop hybrids, then segue into CNG and finish up with their ultimate goal, which is the hydrogen fuel cell. But Lindstrom warned this could be a long way off because of cost, range issues with the vehicle and fueling-station concerns.

We ended the tour at Toyota, which has 65 percent of the hybrid market, and where long waiting lists have been a tradition. We were assured that all Priuses ordered would be delivered in less than a month, a welcome bit of news for consumers who have waited up to six months for their piece of the green machine.

We then trooped upstairs to the outdoor world where members of the press–and later that weekend, John Q. Public–were invited to drive a few of the new “eco-cars.” This is how the drag racing began. I jumped into one of the Mercury Mariners, just as a certain newspaperwoman was revving up the Ford fuel-cell car. Going through the course, which involved driving through downtown San Francisco, she and I met at a light. Her passenger window rolled down. “Wanna race?” she asked. I noticed a mist of water came out of her tailpipe–how would she possibly beat me in that?

“Uh–yeah,” I said while my Ford rep laughed nervously. And we were off! I was in the lead by at least two car lengths. We rounded the corner, and somehow–I still can’t believe she did this with a $2 million car–she swerved, cutting off a van, and beat me back to the Expo by an inch. I found out later she’s the daughter of a race car driver. Figures.

I did get to drive the $2 million car. When I climbed into the vehicle, the rep explained to me before we pulled out into the snarl of traffic: “Million dollar car, $600 bumper.”

Novella’s been going to eco-car events since 2002. E-mail her at [email protected]