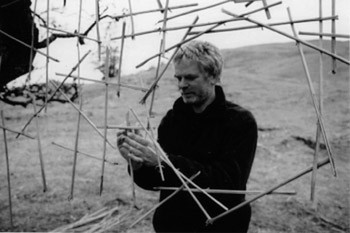 Andy Goldsworthy’s ever changing art is made permanent in film

We comfort ourselves with the idea of the permanence of art. Against cataclysm, against the ultimate fall of our civilization, we hope that something of the best of our world will survive. But much vivid art today is made to vanish–think of fireworks, poetry readings, tattoos. Think of musicians who onstage send out their energy into the ether, leaving behind only untrustworthy memories of what witnesses thought they heard or saw. Thomas Riedelsheimer’s exquisite documentary Rivers and Tides gives you an hour and a half in the presence of a man who is in contact with something essential, maybe eternal. Yet much of his work is made to fall apart.

Andy Goldsworthy is an environmental artist, a sculptor of untreated natural materials. In Rivers and Tides, we see the creation of about a year’s worth of pieces. Goldsworthy has signature work–those egg-shaped cairns often encountered in modern art museums, sculptures made from flat pieces of slate, stacked as high and as wide as a person. Yet he uses a wide variety of mediums: materials as ephemeral as the heads of flowers, as tender as leaves, as massive as boulders, as doomed as the broken ice from a frozen pond.

Early in the film, he completes a squiggle of ice, formed from icicles painstakingly fused together. The same morning sun that lights up his sculpture like neon also melts it. Working against a persistent breeze, Goldsworthy assembles a fragile mobile of twigs and thorns in a pasture. At the end, he’s working with simpler materials yet: clay, red iron pigment, and, at last, handfuls of snow.

As a subject, Goldsworthy is both open and enigmatic. He talks of how he started as an artist, the local history of the town he lives in. We glimpse the personal life of the world-traveling artist at home in between commissioned pieces in Nova Scotia and Storm King, in New York. Goldsworthy has a family and several children, but his rapport with them is left vague.

The Internet helps a little. There, you can glean such information as the details that Goldsworthy’s home in Penpont is near the city of Dumfries. He was raised in Yorkshire; he worked as a farm hand and then moved to his present home in Scotland “due to a way of life over which he did not have complete control.” (That cryptic comment is verbatim from www.sculptor.org.)

Like Goldsworthy’s art, Rivers and Tides is sturdy yet delicate. It offers some clues to the mystery of his art but few clues to the mystery of the man. The art, as Goldsworthy says, focuses on those things that cause upheaval and shock–the tides, the power of water flowing, the seasonal changes. Yet the upheavals and shocks in the subject’s life are mostly suggested between the lines.

Rivers and Tides is worth watching and rewatching as a mystery and not just because it brilliantly conveys the beauty in decay, of ever shifting forms. By including the element of time–and how Goldsworthy works against it–the film gives the artist’s work tension, which keeps Rivers and Tides from being beautiful but dull.