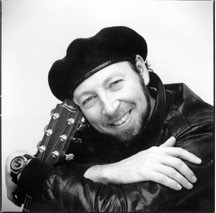 RICHARD THOMPSON wants to have it both ways. A remarkably accomplished folk-rock guitarist, he frequently performs acoustic solo, a format that gives full exposure to his incisive lyrics and nuanced vocals. But when plugged in and amplified, his taut, often modal soloing takes on additional compelling power.

On his latest recording, the two-CD set you?me?us? (Capitol), Thompson gets to have it both ways–one disc, “Nude,” is mostly acoustic; the other is aptly entitled “Voltage Enhanced.” But apparently he still can’t make up his mind, as two of his new songs appear on both discs in contrasting arrangements.

“Out of sheer selfishness, I thought I’d let the public suffer through two records,” the elfin Thompson jokes by phone from a Midwestern hotel room early in the two-month tour that brings him back to the Luther Burbank Center Sept. 27. “Originally we had this wild, madcap scheme, which was to do all the songs electric and all the songs acoustic,” he elaborates more seriously, “which would have been about 34 tracks. That began to seem a bit of a chore, so we abandoned the idea. But the dual versions of ‘Razor Dance’ and ‘Hide It Away’ survived.

“We thought they both had virtues, and we weren’t sure which were the best versions, so we kept them both.”

A similar ambivalence colors his approach to live performances. In his last visit to Santa Rosa, Thompson delivered a mesmerizing performance of his artfully crafted songs with just his own guitar and the rich double-bass work of Danny Thompson (the former Pentangle bassist, who is not related to Richard). This time he is bringing a full four-man band. ” I like to think I can perform everything solo, but it’s probably only 70 percent,” he says. “If I have the band over here, I can do a lot more. I can play more representative of the way things are on the records, for instance.” But that doesn’t mean the whole show rocks out. “We also have an acoustic section and a solo section,” Thompson adds. “A full family show.”

In addition to bassist Thompson, the band includes multi-instrumentalist Peter Zorn, (an expatriate from Phoenix who was “one of 150 musicians in the New Christy Minstrels at one time or another,” Thompson teases) and drummer Dave Mattacks, whose history with Thompson extends back to the early days of Fairport Convention, the seminal Celtic folk-rock band that first fused British traditional music with rock elements in the late ’60s. That influential fusion served as a springboard for Thompson’s celebrated work with his now ex-wife Linda. As a duo, they incorporated an ever-widening range of styles–musical hall and burlesque, Middle Eastern chant, pop, and blues into a singular blend captured on the universally praised Shoot out the Lights and a series of preceding albums–until the couple parted bitterly in the early ’80s.

DESPITE almost constant acclaim, Thompson has never enjoyed a hit, although he notes with pleasure that you?me?us? enjoyed a stay at the top of the adult album alternative-radio format charts earlier this year. In 1993, he was the subject of Watching the Dark, a three-disc, 47-song retrospective released by Hannibal Records. And his esteem among other artists is such that his songs have been spotlighted in two separate tribute albums, one featuring a number of high-profile American acts (R.E.M., Bonnie Raitt, Los Lobos, X, David Bryne) and the other on a small Celtic-oriented label.

“It’s very flattering, very embarrassing. It took me a while to get used to it,” Thompson says of the tributes. “It’s a bit of a shock to hear that much of your own material coming back all at once.” He cites the Dinosaur Jr. cover of “Misunderstood,” as well as the tracks by Bonnie Raitt and Bob Mould as three that impressed him. “I’m not allowed to say which are my favorites,” he admits, hastening to add, “I’m sure I could name lots more if I could sit down and look at the label.”