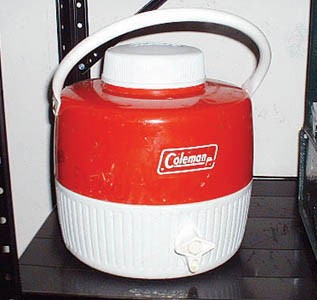 Open only in case of emergency

Now we all know: the government is not going to help in the event of a major crisis. Personally, I’m shaking in my boots, because I live in the Bay Area, and according to New York Times columnist Paul Krugman, FEMA’s top three list of major threats to the American people in the year 2000 were a major terrorist attack in New York City, a hurricane in New Orleans and a major earthquake in San Francisco.

I may be battling for my life in a pile of rubble in a few years. Hence, I’m stockpiling food and water, I’m taking survivalist training. I want to be able to do anything in order to survive. This will include “looting” and stealing cars and siphoning gas. Which brings me to my point: a short lesson in emergency procedures. Please clip this column and place in an envelope that reads, “Do Not Open Except in Case of Emergency.” Why? Because what I’m going to tell you is illegal.

What if all those flood victims could’ve stolen a car? They’d be alive today! A friend of mine knows a group of people who were able to steal their neighbor’s car when they realized they were sitting ducks if they didn’t leave New Orleans, and fast. Over the phone, he gave them instructions. Here are yours, just in case.

(Remember: This is only to be done in the case of a major emergency–you will never be able to get away with this kind of stealing except in the case of a major disaster. This will take about an hour, it will be loud and the car alarm will go off. The point is, if this is life or death, it might save your life.)

First, make sure it’s an acceptable car. There’s nothing dumber than trying to steal a car that has two flat tires. Check that the tires are in shape, the muffler or drive shaft isn’t dragging on the ground and that it has most of its parts. Next, try to open the door. Maybe the owner didn’t lock it. If it’s not open, and the water’s rising, smash the rear passenger window open with a brick or heavy object.

Try to cause as little damage as possible, because you are going to eventually return this car. Breaking a window is actually harder to do than you think, so throw that brick hard! What really works instead of a brick is a spark plug. Something about the porcelain just shatters glass. But you don’t have a spark plug on you during an emergency, do you? If you set off an alarm, don’t worry about it, it’s an emergency and you have enough things to worry about besides a loud noise.

Once inside, get the registration out of the glove box and place it somewhere safe in order to use it to contact the owner after the emergency has passed. Now, remove the protective plastic cover under the steering column. In order to do this, you might need to put a little muscle into it by smashing the plastic with a hatchet or something heavy. Once the plastic is removed, you’ll see an aluminum lock. Take two of the screws out and you’ll see the ignition switch in the middle. Turn this locking mechanism. This mimics the tumbler turning when a key is placed inside. The car should start, and off you go to dry land.

Because what you are doing is illegal, you must be more than honest with your dealings with others. For instance, you must offer rides to anyone you see who needs assistance. Or perhaps you could use the car to shuttle people to hospitals or help carry water or supplies to people who need them. What if everyone in New Orleans could have done this? The newspapers showed so many cars parked in the streets, abandoned, destroyed by the water–what if someone had “borrowed” these cars? People would be safe, cars would be safe. Please, we need more people who are willing to help, by any means necessary.

You didn’t hear it from her, but e-mail Novella anyway at [email protected]