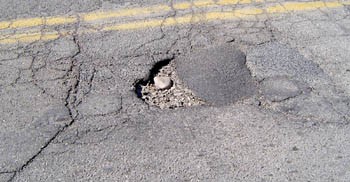 The do’s and don’ts of renting a big one

With just a $170 hold on my bank account, I was able to back a truck up and roar onto the highway with hardly an instruction for driving the beast, except from the rental man who told me, in broken English, “It drives just like a car, except bigger.” I did have to initial some cartoons illustrating the various terrible things that might happen when driving a rental truck, like munching the roof under low clearances and tipping the load when packing it incorrectly. Then the hauler was mine–for 24 hours anyway.

I had Howard Stern blasting, and I pumped myself up for a trip to pick up some very large items down south. Cars, SUVs, even tow trucks looked tiny in comparison to moi, and I noticed that other drivers, normally the type who never give an inch during a traffic jam, waved me over with fear in their hearts. People were scared of me. I was scared of me. Then I hit my first pothole, which caused the truck to jump at least a few inches and almost ripped the steering wheel out of my hands, and I figured out that rental companies are positively insane to rent such big trucks out to the general public.

After a sweat-soaked day on the road, I thought of everyone who might rent a truck, and I mourned for them. In order to not repeat my follies, here are the 10 rules.

1. Watch out for trees! When you’re parking, be careful of that 125-year-old maple that is your grandmother’s pride. You could potentially take off entire limbs with the girth of a truck called Big Yellow.

2. Don’t listen to Howard Stern while driving. His disgusting radio show got me so caught up in its Michael Jackson coverage that I almost flattened a Lotus.

3. Never back up. You can’t see anything! One looks into those mirrors but one can’t squeeze reality from their reflective surfaces, and the next thing you know you’re thinking, “Why did I study biology in college? Should I have chicken salad for lunch?”

4. Don’t cruise down residential streets. Somehow I ended up taking the wrong exit and roared down quiet, tree-lined streets while parents grabbed their children. I tried to calculate what “five tons or less” means in terms of truck weight. I realized that it means, “Not you in a 24-foot rental truck loaded with a bunch of crap.”

5. Don’t drive over 55 mph. I don’t care if a triple-decker semi smokes you with diesel fuel. Those guys are professionals, you are not.

6. Drive in the far right lane. A trucker honked at me because I was lingering in the middle lanes, and that just freaks out everyone on the road.

7. Don’t eat. I was starving and rooting around in my bag for the sweet promise of a peach when I hit a bump and almost lost control of the truck (again). Wait it out.

8. When you park and are unloading, turn on those flashing emergency lights.

9. If a man comes by and offers to you help unload your truck, take him up on it, give him plenty of water and $20. Don’t be surprised if he shows up the next day and says he had to go to the hospital for back pain and wants more money.

10. Find a gas station before you get in the truck. I found myself searching desperately for a station without a stupid roof. I wished that I had asked the rental guys where the closest, safest and possibly cheapest filling station was.

After I returned Big Yellow, they took my payment and I noticed a color photocopy of a crushed truck behind the desk. It looked like the driver had taken the truck under an underpass lower than 14 feet. The rental guy looked back at the photo and shook his head. I shook my head. “I can’t believe how dumb some people are,” I said. I was talking, of course, about myself.