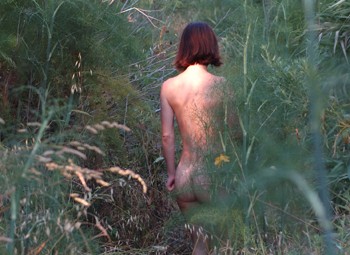 Birthday Suit: If your neighbors can see you cavort in the buff, they can legally ask you to get dressed.

Call of the Wild

Sonoma County nudists seek public place to bare it all

They say the truth hurts, and when it comes to the naked truth, that goes double. Some Americans just can’t bare it. That’s pretty much the main reason why Mr. X, head of the Sonoma County Naturists, can’t use his real name in this article. It seems that the company he works for frowns upon managers who promote cavorting about in the altogether, even if it is for nonprurient purposes. In spite of this forced anonymity–or perhaps because of it–Mr. X continues to pursue his long-held dream of establishing a legal clothing-optional public recreation area somewhere in Sonoma County.

To that end, the Sonoma County Naturists are holding their first-ever Naturist Carnival at Mr. X’s house on July 6. Featuring many of the activities humans are known to love performing while nude, including darts, horseshoes and tetherball, Mr. X hopes that the family-style naturist event will provide the catalyst for a countywide naturist movement. It’s the first step in his three-part plan to establish a naked dominion, and it’s a good thing his property is located in a secluded rural area, because otherwise, under current Sonoma County regulations, the event might be deemed illegal.

“If you’re in your own backyard and someone can see you and is annoyed, [law enforcement’s] interpretation is that it’s a public space,” the fully-clothed Mr. X fumes over a steaming plate of kung pao chicken at a Chinese restaurant in downtown Santa Rosa. “You have to do something to protect your privacy in order for it not to be a public place. Where I live, it is so remote, someone would have to use binoculars or a telescope to see, and that means we are in good shape, as far as it being legal is concerned.”

For those still thumbing through their dictionaries, the pubic symphysis is the joint between the pubic bones in the front of the pelvis. Talk about prurient interest! The code appears to prohibit not only nude sunbathing in public, but the wearing of sheer fabric and those natal-cleft-exposing low-rider jeans as well. Obviously, enforcement of the regulations is not exactly rigorous, and usually doesn’t occur unless a member of the public complains, says Lt. Matt McCaffrey of the Sonoma County Sheriff’s Department. “When we get a complaint, we just ask people to throw some clothes on,” he says. Usually, people peacefully comply and no citation is issued.

That doesn’t sound so bad. But that’s not the way it’s always gone down in the past. Longtime Sonoma County resident Mr. X recalls the heyday of local nudism (or naturism, as he prefers to call it, a term implying a family atmosphere where clothing is optional vs. the mandatory adults-only nakedness of nudism), when hundreds of people flocked to Sunset Beach on the Russian River near Rio Nido. Mr. X first began playing nude volleyball at the beach in the late 1970s and early 1980s, until tragedy struck. “Canoeists who come down the river have an unobstructed view, and a church group in canoes raised holy heck,” he laments. Citations were issued, and the naturists were forced to move upstream five miles or so.

“Wohler Bridge started to grow in popularity after that, because it’s more isolated,” he recalls. But the remote location’s popularity would prove to be its undoing in the early 1990s, when private landowners in the area began complaining about encountering the occasional pair of naked savages in flagrante delicto. The sheriff’s department again began citing nudists, fining each $50 for the first offense and $500 or six months in jail for the second.

This effectively put a damper on nude sunbathing in Sonoma County; the region by then had earned a reputation for being hostile to nudists. San Francisco Bay Guardian writer Gary Hanauer, in his annual guide to the state’s nude beaches, downgraded Wohler Bridge from a favored A status to merely a C in large part because of the raids, even though they have since discontinued.

“Most of my life, I’ve enjoyed feeling the air and the sun on my body,” says Mr. X, but in the years following the raids, he went underground, at one point nearly forgetting the activity that gave him so much pleasure. But then a chance visit to a naturist resort with his wife opened his eyes again. “We said to each other, ‘You know, this is so much fun, we need to find other people who want to share this lifestyle.’ Six of us got together, and we started building Sonoma County Naturists from that.”

The group set up a booth at this year’s Harmony Festival and attracted 40 or 50 new members, says Glen Graves, who recently joined the effort himself and is fielding phone calls from prospective carnival attendees. Graves first came to appreciate the clothing-optional lifestyle living in Santa Barbara, which has a well-established nude beach.

“My issue is the whole thing about legislating morality,” says Graves. “A few people want to impose their will on innocence. One of the things we’re doing is reclaiming that sense of innocence.”

Once the naturist group has gathered enough members, Mr. X plans to take the second step: finding a suitable location in Sonoma County. Sunset Beach and Wohler Bridge are obvious choices, since use of both areas by nude sunbathers has long been accepted by most locals. However, “user conflict” between naturists and the few people genuinely offended by public nudity may remain, necessitating a change in the county code–the all-important third step.

“Then you’re getting into some serious politics,” explains Allen Baylis, an attorney for the Naturist Society, a national organization that promotes clothing-optional rights. Political signals from the public on the issue are mixed, he adds, noting the society’s national poll conducted by Gallup in 2000. The poll found that 80 percent of the public believe people should have the right to enjoy nude sunbathing, but only 48 percent felt that state and local governments should set land aside for that purpose.

An easier route may be to establish a nude recreation area somewhere along the Sonoma Coast State Beach, which extends 17 miles from Bodega Head to north of Jenner. Then jurisdiction would fall to the state park system. Although the state hasn’t officially designated any of the beaches within the system as clothing-optional, it permits beaches that have been traditionally used for such purposes to become unofficially designated under a decision known as the Cahill Policy.

Such a stance is not unlike the approach currently employed by the Sonoma County Sheriff: If someone complains, then rangers ask people to put their clothes back on. The policy is in effect at Red Rock Beach in Marin County, perhaps the most popular nude beach this side of the Golden Gate, where up to a hundred or so nudists gather every weekend, weather permitting. Complaints are rare at Red Rock, in large part because the beach has a well-developed user group, with volunteers who help monitor the beach, pick up trash and monitor behavior.

Of course, the truly desperate Sonoma County naturist can always pony up the bucks to go to a nudist resort such as Harbin Hot Springs. That’s not good enough for Mr. X, who believes naturists need and deserve a public place they can call their own, free from even the thought of being hassled by law enforcement for something that comes, well, naturally.

“There needs to be a place where we can go that’s not someone’s house,” he says. “Do you have to pay to go to the beach? To go to the river?”