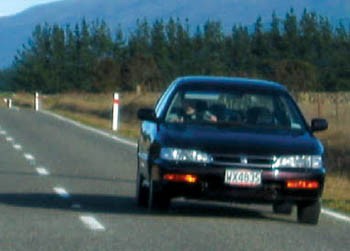 Searching for a Better World in roadside assistance

Here’s a philosophical question: If you were broken down on the side of the road with a flat tire, would you rather a hippie saved you or a right-winger?

On one hand, the hippie would arrive via hippie dust and with good vibes, but there’s the potential that the Crusty One might get sidetracked by some killer buds, and you’d be waiting all night. On the other hand, the right-winger is certain to arrive on time, but then you might have to listen to Rush Limbaugh on the ride to the repair shop.

Sadly, this isn’t a theoretical decision; it is the reality of roadside service, and that right-wing roadside service provider would be the Automobile Association of America.

I didn’t know until I started spending a bunch of time in Berkeley that AAA isn’t the most earth-friendly company around. According to the National Resources Defense Council, AAA didn’t support the Clean Air Act of 1990; they dragged their feet on air-bag-safety mandates; and they are part of a powerful lobbying group called American Highway Users Alliance. This group, made up of automobile executives, cement companies and truck companies, is pro-sprawl. But what are you going to do? Almost 50 million members of AAA, including myself, depend on its roadside service, its maps and its relatively inexpensive auto insurance.

Which company embodies the hippie roadside-service end of things? Better World Club (www.betterworldclub.com). Many people have never heard of the Better World Club, and that might just be because they don’t provide service in your state. Until recently, BWC only served four states, but now provides services to 16.

Better World’s schtick is my schtick: You might need to drive, but you’re not happy about it, so let’s try to drive as lightly as possible. Better World offers a bevy of cool features to add to its roadside assistance plan, which starts at $54 per year. These include bicycle roadside assistance, a carbon offset program like that of TerraPass and a discount for hybrid owners. The company also donates 1 percent of profits to environmental cleanup efforts. Kicking Asphalt, their e-newsletter, is brilliant and funny. It apprises readers of what’s going on in the auto-lobby world, in conservation circles and activist activities. They even have a gas guzzler surcharge, though I somehow doubt the owner of a Hummer 2 would go to Better World.

In short, BWC is the anti-AAA. Sounds great, right? Well, I hope so too. I polled my many eco-conscious friends and discovered that many of them used Better World. The majority of them heard about the service on the NPR show Car Talk. Almost none of them had occasion to use Better World services, though. But one couple had, and was disappointed by the experience.

Roger and Maia signed up for the service because they wanted to support a company that supports public transportation, fuel efficiency and environmental legislation. Alas, they described their BWC experience as being similar to a Lemony Snicket tale: a series of unfortunate events. The maps they ordered, AAA-style, two weeks before their trip from BWC arrived the day after they had left for the road trip.

A service call made when the car had problems while crossing the Hoover Dam got mysteriously disconnected. Roger’s eyes rolled every time they went to check into a hotel and the clerk asked them if they were eligible for an AAA discount. BWC didn’t send a renewal notice, and consequently Roger and Maia drove around without roadside assistance for months until they actually needed it.

I asked Maia if she’ll stick with BWC, and got the sense if there was one more mistake, she’d have to resort to AAA, but not happily.

Perhaps it’s just growing pains. After all, AAA’s been in business for over a hundred years–no wonder they’ve captured so many members. Let’s see what a few more years will do for BWC. In the meantime, you’ll have to weigh the options. I know I am.

Correction: Last week’s column about air bags got me letters from both the NHTSA and SafetyBeltSafe USA! I misunderstood the mechanism for how air bags kill babies: they don’t suffocate the little things; the bags hit them with enough force to kill them. And this is only if the child has moved out of the restraints of his or her seatbelt.

From the November 30-December 6, 2005 issue of the North Bay Bohemian.