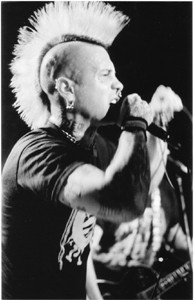 Fury is nothing if not resilient

Aside from waking up at 1:30 in the afternoon, Fury is by no means your average punk-rock singer. The inside of his apartment shows the immaculate surroundings of a very tidy home. There are no capsized ashtrays, no piles of beer bottles in the corner. The walls are covered with posters and flyers for Resilience shows–all of them laminated. A Joan Jett record plays on the turntable and the sun shines through the kitchen window, its beams terminating squarely upon a pot of flowers and bowl of fruit at the kitchen table.

Fury is covered in tattoos and is, at this point, somewhat stuck with a menacing name, but the Mohawked 26-year-old singer for Resilience takes pride in shattering punk clichés of nihilism and disarray with his chatty, genuine demeanor. It is a widely held view that he is far too nice to have his name. “It’s more or less our job to discredit all the stupid stuff that isn’t really punk at all,” Fury says determinedly. “I think a lot of angst and youth frustration gets confused with being punk, but to me, I see punk as an actual worldwide movement that doesn’t even realize its own force.”

A cross-section of this force is found downstairs at Subculture, the punk-rock accessory store on Santa Rosa Avenue that Fury opened eight months ago. Fury is the kind of workaholic who cannot put off what he thinks is a good idea. Along with the retail business, he also manufactures T-shirts for local bands and recently started his own tattoo parlor inside the storefront. Most would find this schedule exhausting, and to top it off, Sound of Strength, Resilience’s second album, has just been released. The title, it turns out, is apt indeed.

“We could have made our music crusty-sounding, we could have made it poppy-sounding and we would probably still have fun. But we made it tough-sounding, because I want people to feel strong when they’re singing along,” he says. “To me, it’s like soul music, because, hopefully, if you do it right, it’s coming from the soul.”

In the past five years, Resilience have cleared every hurdle as a band on their own. They have no manager or booking agent, yet have completed nationwide tours with Total Chaos and Lower Class Brats. They have no merchandising deal, yet their shirts and stickers are seen everywhere. Their first album, Never Give In, was self-released, and when an independent label showed interest in the band, Fury was humorously blunt about relinquishing control. “I told them when we first started talking, ‘We hate record labels, we hate your entire industry and we don’t need you.'”

Resilience found their meticulously laid-out terms accepted, however, and the result is a solid album of punk anthems. The lyrics decry racial pride, organized religion and corporate warfare, but bubbling over the political surface is an emphasis on personal freedom. As Fury puts it, “Once you realize that you’re not here to please society, that you’re not here to conform to a certain set of rules, once you realize that you should just try to be yourself and be honest, that’s more important than any necessarily political standpoint–the idea of actually thinking for yourself, of breaking down what you’ve been told and thinking it through yourself.”

What might come across as half-baked rhetoric from anyone else takes on an inspired touch from someone who has so obviously created his own path in life. Fury is quick to note, however, that staying true to one’s self among the upper-middle-class apathy of Sonoma County has its alienating side as well.

“When I walk down the street, I look at all these people, and I wonder, do they even think about their own life? Do they think about where society’s headed, or really much at all? Or are they just trying to stay comfortable for the moment?”

Fury takes a final slug of coffee and looks out the window. “I really can’t relate to them, most of the time.”