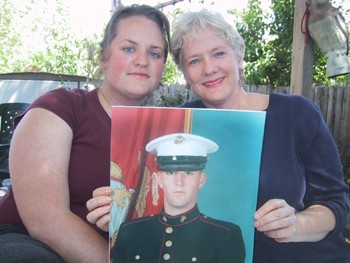 When Delia Hulke saw the collapse of the World Trade Center buildings on television on Sept. 11, 2001, she instantly knew that her little brother was going to see combat. Three years younger than his sister, 19-year-old Jan Hulke had joined the U.S. Marines on the delayed enlistment program earlier that year. On Sept. 16, less than a week after the day that changed everything, he reported to boot camp. He’s now a corporal deployed in Iraq with the First Marine Expeditionary Force, patrolling the dangerous border area between Iraq and Syria. Delia thinks about him “every single moment of every single day.”

The Hulkes grew up in Santa Rosa in a family with a long tradition of military service. Two grandfathers fought and survived the Battle of the Bulge in WWII; another fought in Korea. Kathy Twers, their mother, has a brother who served in the Marines. Fred Twers, their stepfather, served in the Navy during the Vietnam era. This isn’t a family that shirks duty to country. But now Kathy, Fred and Delia, while remaining supportive of Jan and the troops, are joining a growing chorus of military families demanding that the soldiers be brought home.

“We’ve got to find a way to get them out of there,” Kathy says during an interview in the family’s comfortable west Santa Rosa home. “I’m not saying we should cut and run, but we need a solution. We can’t keep doing the same thing and expect different results.”

To that end, Kathy recently penned an opinion piece calling on citizens to begin questioning the Bush administration’s rationale for the war–the alleged weapons of mass destruction and ties to al Qaida 9-11 terrorists that have so far failed to materialize. On Sunday, May 30, she’s the featured speaker at the Santa Rosa Peace March and Day in the Park sponsored by the Peace and Justice Center of Sonoma County.

According to a March 11 article in the Washington Post, the exact number of military families opposed to the war is unknown but is thought to be growing. Military Families Speak Out, one of several national organizations that have arisen since the war began, told the paper that more than 1,000 military families have registered at its website, www.mfso.org.

“Most of the families don’t want to stand up, because if you say something antiwar or anti-Bush, you’re called unpatriotic,” Twers says. She vehemently rejects that charge. “It might be my son today, but it’s going to be your son or daughter tomorrow. We’re their only voice–they can’t quit.”

Kathy and Fred Twers call themselves liberals, and there’s a “John Kerry for President” placard taped to their garage door. But they say their opposition to the war in Iraq transcends partisanship. They understand Jan freely chose to join the Marines, and supported his decision. “But he also trusted our government to send him to a righteous war,” Kathy says. “This is the self-righteous war of a few men.”

Shortly after 9-11 and Secretary of Defense Donald Rumsfeld’s order that intelligence services sweep up evidence on Iraq “related or unrelated” to the terrorist attack, Kathy began to understand that the Bush administration wasn’t just setting its sights on Afghanistan. She was worried and told her son so.

After boot camp and infantry school, Jan was sent to the Marine Corps Air Ground Combat Center in 29 Palms for desert combat training. He completed training in February 2003 and was shipped off to Kuwait. With her son overseas and the war imminent, communication, by telephone and by e-mail, became difficult.

“We didn’t hear from him for a whole month,” Kathy recalls. During that period, Kathy’ sister succumbed to liver cancer and on March 19, the day Operation Iraqi Freedom began, Kathy’s mother died in her sleep. Finally, two weeks after the war began and shortly before the fall of Baghdad, Jan called home and reported that he was OK. That was about all he really could say, due to strict military guidelines that prohibit soldiers from talking about ongoing combat operations. It wasn’t until Jan returned home in September that Kathy really noticed a change in her son.

“He was different,” she remembers. “Jan still has a sense of humor, he’s still strong emotionally and spiritually. But his eyes–the innocence is gone. You can see the sadness in there, and you just wish you could do something about it. Taking another human life really bothered him a lot.”

Killing another human being, even in wartime conditions, can exact a tremendous toll on the human psyche. But what bothered Jan the most wasn’t the war or the killing. “What was hard for Jan was keeping the peace, when kids, women, anyone could be the enemy,” Kathy says.

“I just wish I could tell them, ‘Put your weapons down and go home,'” Jan told his mother.

Jan saw both the family priest and therapist while he was home; it was recommended that he seek a therapist with combat experience to deal with the problems he was experiencing. He returned to 29 Palms to await further orders just as the national debate over the yet-to-be discovered Iraqi weapons of mass destruction began heating up. As the Bush administration shifted blame for the intelligence failures to the CIA and the rationale for invading Iraq from preventing an imminent threat to “liberating” a decidedly undemocratic country, his new orders came in. For the first time since Vietnam, the Marines, primarily used as an invasion force, were being sent back into a war zone.

“You just got back from there,” Kathy said to her son. “Why can’t somebody else go?”

Jan Hulke’s redeployment in February was noted in a March Santa Rosa Press Democrat profile of local armed forces personnel serving in the Gulf. Twers told the newspaper that she was relieved her son had been sent to an area in Iraq near the Syrian border and away from the fierce fighting in the Sunni Triangle. At the time, she had no way of knowing that her son’s redeployment was part of a planned military build-up to stop terrorists and insurgents from crossing the porous border into Iraq.

“We weren’t getting any news, we weren’t getting the truth,” she says. Pentagon officials refer to the action along the Iraqi-Syrian border as the “silent war,” and for good reason: with most of the media focused on activities at or around Baghdad, few outlets pay attention to the increase in violent skirmishes near southern Iraqi cities such as Al Qaim and Qusaybah. In March a recruit fresh out of boot camp under Jan’s command was killed. On Good Friday, six Marines were killed in a violent battle near Al Qaim, including Elias Torres, one of Jan’s best friends. Jan e-mailed his mother, worrying that his days might be numbered.

Kathy and Fred Twers have no intention of waiting around idly for Jan’s return. Fred’s Catholic high school lost 27 of its graduates in Vietnam, the most in the country. He doesn’t want his stepson turning up on any similar lists. Growing up in Iowa, Kathy remembers the movement that turned the war around.

So on Sunday, May 30, Kathy will stand up in front of a crowd of sympathetic strangers to explain why the troops, including her son, should be brought home now. Jan will be there with them in spirit, if not in body.

“Understand that I won’t be mad if you guys protest,” he wrote in a recent letter. “Just make sure they can hear your voices.”

The Santa Rosa Peace March and Day in the Park is on Sunday, May 30. Meet to march at 10am, Roseland Shops Parking Lot, 655 Sebastopol Road. Procession goes to Juilliard Park, Santa Rosa Avenue at Sonoma Avenue, Santa Rosa, for event from noon to 5pm. Free. 707.575.8902