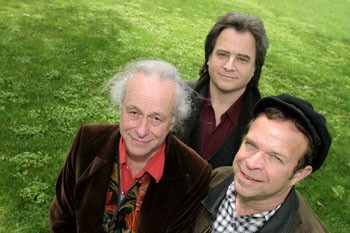 Born of the men’s movement, still drumming up spirited discussions, the Redwood Men’s Center prepares for its annual all-male retreat

At just past 11 in the morning, an hour that dangles uneasily between late breakfast and early lunch, the sunniest corner of the Redwood Cafe in Cotati has been infiltrated by a cool triumvirate of extraordinary gentlemen. Hari Meyers, 63, Alan Ptashek, 53, and Tommy Phillips, 55–heads bent together like broken bobbleheads on a shelf, faces bright with expectant concentration–sit deeply engaged in low-volume conversation.

There are coffee cups on the table, sheafs of paper tucked inside a weathered manila folder–and is that a gnarled rain stick leaning against the wall? What, one has to wonder, is the fascinating focus of discussion on which this trio of conspicuous brainstormers have trained their collective intellect?

Would you believe they are talking about the soul?

Not their own souls, individually–not the souls of Hari, Alan, and Tommy–but the souls of men. As a group. As a gender. It is the state of men’s souls that currently engages these gracefully middle-aged representatives of collective manhood.

As organizers of the Redwood Men’s Center’s yearly all-male retreat and conference–this year titled “Living on the Verge: Our Wounded World, Our Healing Selves”–Meyers, Ptashek, and Phillips are keenly aware that the human soul needs its share of TLC. They believe that men who exclude themselves from that diagnosis do so at their own peril.

Every May for 13 years, Bay Area men of varying ages, ethnic backgrounds, and sexual orientations have been gathering to spend five days in a wooded setting with a hundred other guys. Originally dubbed the Men’s Professional Psychology Conference, it began as a modest convention of psychologists and healing professionals, gathering in hotel meeting rooms to make presentations and discuss psychology as it pertained to the health of men.

Since then, the event has evolved into a full-on retreat in the woods of Camp Gualala, where the men are housed in rustic cabins, surrounded by ancient redwoods along the banks of the meandering Gualala River. In this setting, the men employ drum circles, storytelling, art, aikido, and creative discussion groups to explore their own individual issues as 21st-century males.

“When we say ‘men’s issues,’ what are we talking about?” asks Ptashek. “We could be talking about sexism, racism, homophobia, gender identity–a lot of the things that are really hard for men to speak about when they are in the traditional barroom settings, the locker-room settings, the football-watching settings. Not to put those things down–they can certainly be soulful in their own way–but we were trying to make a safe place for a hundred or more men to gather for four days and, in the sense of the word conference, to confer with each other, to walk along a path in the woods together, to come into a circle where we open it up as a consult to hear what every man is reaching to say from his heart and his mind.”

Once established, the conference experienced a turning point a few years back during a weekend that had been titled “Restoration of Soul in a Culture of Death.”

“It was kind of a pretentious title,” admits Meyers with a shrug. “But what we came to was this: We realized that this culture we’re all swimming in, in many ways, promotes the death of the soul.” Shifting away from the purely psychological growth the conference had explored in its early years, and spurred on by the participating philosopher-writer Robert A. Johnson, author of He, She, and We, the organizers of the Redwood Men’s Conference found themselves focusing on the soul and ways to restore that sense of soul in our culture and our lives.

“We began looking at the work of Joseph Campbell and the hero’s journey, exploring what he calls ‘the stages of exile,'” Meyers says, “and what we’ve been asking the last few years is, what are the gifts we can make from the ruins of a dying culture, what gifts can we bring back to that culture?”

Meyers, a founding member of the Redwood Men’s Center conference since its beginning, is a local therapist, in addition to being an active performer and storyteller. Ptashek is a Sonoma County therapist who began doing “men’s work” in the mid-1980s, when the so-called mytho-poetic branch of the men’s movement–born of the work of such poet-philosophers as Robert Bly and Michael Meade–was just beginning to flourish.

Phillips, an attendee of the yearly conferences for about five years, is new to the organizing committee, though he’s been involved in the men’s movement for 10 years, tasting the flavor of different kinds of men’s groups, from the so-called chest-beating groups (“A lot of heady, cigar-smoking, feeling-powerful-as-a-man kind of stuff,” he says) to more introspective groups like the Redwood Men’s Center.

As a group, they are working to expand awareness of the conference to include more newcomers than ever before.

“We are putting out the call for other men to join us,” says Phillips. “Though we’ve always tried to include men from different backgrounds, there is a lot more room for diversity among age and cultures. We are definitely interested in outreaching.”

That outreach, he admits, can be difficult, since the things that go on at a typical men’s conference are so hard to describe to newcomers. Case in point: Throughout this morning’s coffee-break discussion, Phillips, Meyers, and Ptashek frequently describe the conference using terms such as “talk/process,” “Jungian archetypes,” “blessing elders,” and the potentially intimidating phrase “soul work.”

“It’s all quite powerful and quite beautiful,” laughs Meyers, “but it is kind of difficult to explain.”

Perhaps the best course is to stay focused on that all-important word “soul.” How, exactly, does each of these gentlemen define it? Not surprisingly, they each define it differently and with varying degrees of poetry and introspection.

“What I mean by soul,” explains Phillips, “is my deepest part, my essence as a man. Soul is that part of me that, when I hear music or a poem, or see something beautiful, is invoked so that I become more and more aware, aware that this is something of beauty and quality that I want to be a part of.”

“Soul means many things to me,” says Ptashek. “Soul is, in a moment of quietness and perhaps even melancholy, when I am near a stream in the woods and I suddenly find myself looking down, remembering people I love, feeling some of the losses in my life, and feeling the earth beneath me. Soul is the deep character, it’s the poem, it’s the essence of who you are that was not necessarily seen or heard or blessed as a child.”

“I’ll take a crack at it,” smiles Meyers, pausing 10 seconds before going at it like this. “I identify often with my personality,” he says. “I have a personality that I show to the world, and I often think that’s who I am–Hari Meyers, storyteller, this and that. But I’m aware that there’s something beyond that. The personality is conditioned, but the soul is not conditioned. It’s my universal part. It’s more the part of me that witnesses the world; it doesn’t act so much as it feels. My soul is that quality that transcends my personal preferences, my personal drama.”

And what is it that the soul–men’s souls, your soul, my soul–can expect to experience throughout the weekend?

“Well, as we’ve heard over the years, directly from the men who’ve participated in these weekends,” says Ptashek, “what happens is that their soul-needs–the soul-longings that they and you and I are all carrying–are heard, and recognized, and acknowledged. That’s extremely powerful and important.

“As we say every year,” he adds, “You cannot make a mistake here. The ancestors are with us. Our friends are here. We are looking to support each other. We are going to find our voices, and when we put those voices together, a thing of beauty happens that warms your heart and touches the souls of men.”