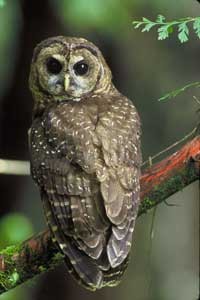 Owl Gone? Only 560 pairs of northern spotted owls are left in Northern California.

Fall of the Wild

For 12 years, California congressman Richard Pombo, the Republican from Tracy, has worked to overhaul the federal Endangered Species Act. He took a giant step toward the realization of that dream on Sept. 29, when the House of Representatives approved HR 3824, the Threatened and Endangered Species Recovery Act of 2005.

Among its many provisions, the bill eliminates the concept of “critical habitat.” It empowers a political appointee, the Secretary of the Interior, to determine the best science, exempt projects and entire genera from environmental review, and mandates that projects go forward with no review at all unless federal agencies object within 90 days. With staffing and budgets already stretched thin, and more cuts being the norm, meeting this deadline may be challenging. Finally, the bill requires the federal government to compensate landowners “harmed” by environmental protections. The money would come out of America’s budget for national parks, wildlife refuges and endangered species.

Pombo also plans to reduce environmental protections, and the National Environmental Policy Act (NEPA) is a priority. The law subjects projects involving federal funding or federal agencies to scrutiny and review. A local example is Port Sonoma, the proposed ferry project in Sonoma County that recently received $20 million from the federal government.

The slow pace of the NEPA process has long rankled developers, and from April through September, Pombo’s NEPA task force held five regional hearings in various locations around the country. The stated purpose was to gather testimony to highlight “where NEPA is working and where it can be improved.” But it soon became apparent that the real purpose was to build a case against NEPA. Early next year, Pombo will introduce a bill to overhaul NEPA, probably with provisions similar to those of his Endangered Species Act overhaul.

National parks and national forests are also vulnerable. Pombo has proposed selling 12 national parks to private interests for gas and oil drilling. And Pombo is holding three forest-protection bills in the House Committee on Resources, which he chairs. The bills may die before reaching the House floor.

Challenging the notion that HR 3824 has anything to do with species recovery, North Bay congresswoman Lynn Woolsey says, “The Pombo bill will make it too costly to save any species, and replaces science with political decisions.”

But Lex McCorvey, executive director of the Sonoma County Farm Bureau, has a different view. “Pombo’s bill actually provides incentives for property owners to participate [in species recovery]. I think willing participation in the long run is much better for the recovery of a species.”

Should HR 3824 win Senate approval and become law, the odds against the survival of these species are huge.

The bill is now in the Senate Subcommittee on Fisheries, Wildlife and Water, chaired by Senator Lincoln Chafee. Chafee is pushing for a bipartisan consensus on the Endangered Species Act and mediators to develop a list of recommendations on addressing critical habitat. He also wants to delay considering the bill until early next year. Inhofe, who chairs the full committee, seeks an earlier date.

If worst comes to worst, the California Environmental Quality Act (CEQA) may provide some species protection. The state’s version of NEPA, CEQA makes developers and government review the consequences of their actions on projects involving state funds or agencies. “It doesn’t say you can’t eliminate a species. It doesn’t say you can’t go forward with a project,” says Kim Delfino, California program director at Defenders of Wildlife in San Francisco. But sometimes, CEQA has that effect.

For example, in 2001 the Marin Audubon Society filed a lawsuit against the Novato City Council under CEQA. At issue was the council’s approval of an extension of a housing project on the Bahia Marsh. At the same time, residents gathered signatures for a citywide referendum. Litigating under CEQA was important because it revealed genuine and justifiable concerns about the environmental review. After the overwhelming success of the referendum, the developer agreed to negotiate, and Marin Audubon purchased the property, thus protecting a small population of endangered clapper rail and 125 other speices of migratory shorebirds and waterfowl.

Environmentalists and others remain concerned that if HR 3824 becomes law it will severely weaken the Endangered Species Act, and there’s nothing comparable. California’s Endangered Species Act is already too weak to do much good; NEPA is under fire; and CEQA occasionally protects endangered species, but not often. It appears that concern about the fate of endangered species and the environment is absent from Pombo’s plans. “Federal ESA requires a fair amount of [public] notice and comment,” says Delfino. “But the state act provides little notice and opportunity for the public to comment. If Pombo’s bill passes, it will put incredible pressure on our state ESA.”