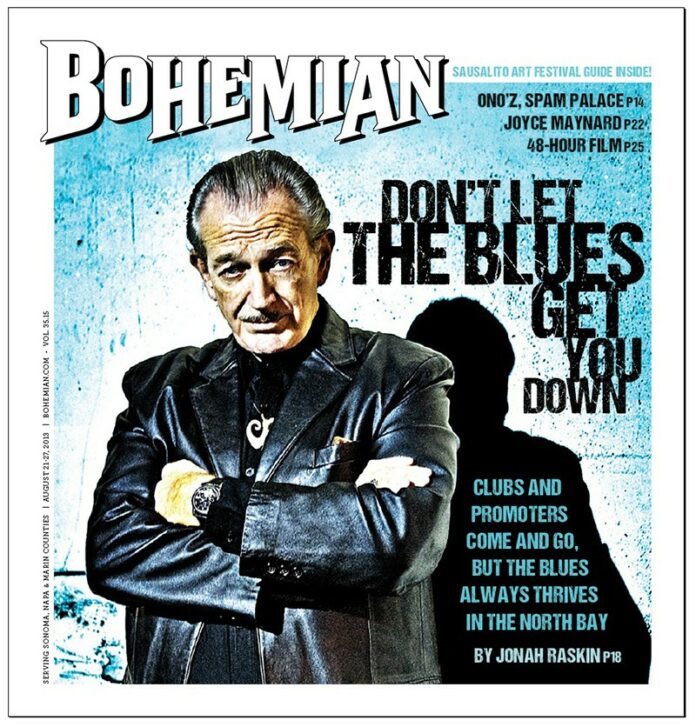 Every time the local blues scene hits a crossroads, it finds its way home

Every Sunday evening, whether the sky’s blue or cloudy, Bill Bowker, 69, blasts the blues from Studio “H” at the KRSH (95.9 FM), the station that has long played the moody, soulful music that began in Mississippi and traveled north and west to Memphis, Chicago, Detroit and California, morphing all the way.

“On the KRSH, Blues with Bowker,” he says, his mouth practically kissing the microphone as he selects yet another tune by Bobby “Blue” Bland, who died this summer at his home outside Memphis at the age of 83. Van Morrison, the Band and the Grateful Dead popularized Bland’s biggest hits, such as “It’s My Life, Baby” and “Farther Up the Road.” And ain’t that the way it’s always been with the blues; somebody’s always covering the originals and making a mint.

For two hours tonight, Bowker’s in blues heaven. So are listeners who’ve learned to hear the difference, thanks in large measure to his regular Sunday-night shows, between a really good English translation of the blues and the authentic Mississippi sound.

Like blues aficionados almost everywhere these days, Bowker gets hot and bothered about the state of the music that he loves and promotes. At times, he even sounds down about the local blues scene. After all, the Last Day Saloon, a venerable venue for the blues, just closed its doors. But one club closes and another opens. At the newly risen Fenix on Fourth Street in San Rafael, there are blues jams with local talent, and special guests such as Lynn Asher once a week on Wednesday nights all year long, plus a bar and gourmet food. Sounds like blues heaven.

Merl Saunders Jr., son of Merl Saunders, the preeminent piano player and king of the keyboards, books the shows at the Fenix. His father’s love of music rubbed off on him a long time ago, as did a lot of music history. Born in San Mateo, Saunders Sr. collaborated with the likes of Jerry Garcia, Mickey Hart and Bonnie Raitt. He died in 2008, but his soul lives on at the Fenix. Saunders Jr. tells me, “Name any kind of music. Go ahead. We have it all: jazz, bluegrass, soul, classical and, of course, the blues.”

In fact, the Fenix House Band—drums, guitar, keyboard, sax and bass—wails the blues every week. Saunders is committed to new talent and to veteran all-stars. “Six months after opening,” he tells me, “we’ve already showed up on the radar as a destination for touring bands.”

There are heaps of young talent out there, from Marin to Mendocino, and tucked away in the hills are the old masters: singer, songwriter and guitarist Nick Gravenites, and Charlie Musselwhite, who plays a mean harmonica and who hosts and boasts his own show on the KRSH.

With all that talent, Bowker never gets down about the blues for long, if only because his own show has a steady stream of loyal listeners. He also sees hopeful signs close to home. Just the other day, he drove up to “Beverly Healdsburg,” as he calls it, to attend a free concert in the plaza by the North Mississippi Allstars. “The place was packed with the older wine crowd,” he tells me. “You know, the guys with the sweaters and the women fashionably attired. The blues isn’t their thing, but they were getting into it, starting to move their bodies. The blues are infectious and damned hard to resist. I went home feeling mighty pleased.”

Bowker’s good friend and fellow aficionado of the blues Sarah Baker shares his upbeat outlook, though she, too, mourns the closing of the Last Day Saloon where she performed for years. “I think the blues are taking a downturn right now,” she tells me. “But they’ve taken downturns in the past and they’ve bounced back. The fact is that there are always blues lovers, just as there are always people who have the blues. The music will always speak to them and for them. It’ll always have an audience.”

Baker and her band, Blues Kitchen, perform from Sonoma to Alameda, Contra Costa to Clear Lake, and she doesn’t intend to stop now. “Some blues performers, like Tommy Castro and Roy Rogers, are doing very well, and of course so is B. B. King, who never goes out of style,” she says. “It’s often a matter of luck who succeeds and who doesn’t. You have to persevere.”

Headliners include the hellacious harmonica player Charlie Musselwhite and his band, plus singer, songwriter and guitarist Johnny Rawls, who grew up in Mississippi and learned to play guitar from his blind grandfather. Also playing is Markus James, who combines down-home American blues with the music of Mali, and performs with drummer Kinney Kimbrough, son of legendary Mississippi bluesman Junior Kimbrough. The Hound Kings, an acoustic blues trio from San Francisco that includes Alabama-born Michael Benjamin, Scot Brenton and Anthony Paule, launch the fest at 2pm. Their show is free; James and Kimbrough are also free. What’s not to like?

Back in the 1970s when Bowker first arrived in Santa Rosa fresh out of L.A., where he had his own show, he thought he’d be in and out of town fast. “In this business, where rapid turnover is the name of the game, I never planned on a long stint here,” he says, his hands moving rhythmically across the control panel, the instrument he plays like a pro. (Rapid turnover indeed: just last week, KRSH-FM morning DJ Brian Griffith was let go from the station; Bowker, for the first time in years, takes over the morning slot this week.)

Born in prosaic Passaic, N.J., where the only blues that he could hear was broadcast on WNBJ, Bowker is all about the roots of the music. He loves the Delta sound and the echoes of Delta music he hears in local groups such as Blues Kitchen, the all-woman band, with Nancy Wenstrom, Sarah Baker and Jan Martinelli.

Blues Kitchen carries on the tradition of Ma Rainey, known as the “Mother of the Blues,” and the many blues sisters who have followed in her wake. Wenstrom, the band’s sultry lead singer and guitarist, hails from Texas and has performed for 40 years. She first heard the blues played by Eric Clapton and Jimi Hendrix, later from Otis Rush, famous for bending his notes brilliantly, and Magic Sam, who learned to play by listening to records of Muddy Waters. Little by little, she fell in love with the music that came out of Mississippi.

“The blues is an elusive woman,” Wenstrom tells me at Sarah Baker’s tiny studio during a break in an afternoon rehearsal. Strumming her guitar, she adds, “The blues hurt you like a woman, and they also make you feel real good like a woman.”

Baker, who plays keyboards and provides vocals, heard B. B. King and Rufus King growing up in both rural and urban Tennessee, her home state. “You would have to be blind, deaf and dumb not to see and hear the blues in Memphis,” she tells me. She adds, “The blues are not downer music. Rather, they provide a way out of feeling bad.”

Baker, Wenstrom and Jan Martinelli, who plays standup bass, perform every variety of the blues, from Sippie Wallace and Bessie Smith to Miles Davis and Horace Silver. They also offer their own originals: Baker’s “Use it or Lose It” and Wenstrom’s “Brickyard Blues.”

Martinelli began to perform in junior high. She had her own band that interpreted songs by Janis Joplin, Jimi Hendrix and Cream. “Blues Kitchen fans are mostly 40-plus,” she tells me. “We always have a great audience when we play at Armando’s in Martinez, but we’ve also had good listeners at the Redwood Cafe in Cotati.”

For Bowker, the blues are an untamed force. “I like the blues raw,” he tells me in a tone of voice that’s raspy and smooth all at the same time. He adds, “I first heard the blues as a kid, and they really scared me. Howlin’ Wolf gave me goose bumps. He still does. The blues still scare me.”

No mention of local blues is complete without the long-running Russian River Blues Festival, which for over three decades has brought the music of the dark juke joint to the sunny shores of the river in Guerneville. This year’s lineup includes Boz Scaggs, Robert Cray, Los Lobos and the California Honeydrops.

Once-a-year festivals are one thing; once-a-week jam sessions are another. John Ranis plays rhythm ‘n’ blues on the guitar when he’s not selling insurance at Allstar West in Petaluma. The Sonoma County Blues Society, a nonprofit that he’s often carried on his own back, aims to keep the blues alive. “It’s an indigenous American art form,” Ranis tells me proudly. No one is more enthusiastic about the blues than he, and no one is more supportive of new talent.

Every Wednesday night from 7 to 11, Ranis hosts a blues jam at Society: Culture House in Santa Rosa. To attend, one need not be from Mississippi, play like B. B. King or sing like Janiva Magness, the woman who lived the blues as an orphan in foster homes before she learned to sing them. Ranis welcomes one and all, even if one’s musical skill is just finger snapping and hand clapping. This September, performers include Norman Greenbaum and the Mike Marino Band. Right now, Ranis is especially excited about the two young musicians who make up the Honey Dippers. “Corey Herve and Gonz Ochoa play because they love to play, not because they’re making big money,” he tells me. “For new blood in the blues scene, they’re phenomenal.”

Dozens of locals—Bill Noteman, Sonny Lowe, Jody Counter, Levi Lloyd, the Scallywags and the Wilson-Hukill Blues Revue—express their love for the blues almost every night of the week, from the Willowbrook in Petaluma and the Tradewinds in Cotati to Aubergine in Sebastopol and the Blue Heron in Duncans Mills. Wineries showcase blues bands, too, and on KRCB, Mary Carroll hosts her heavenly program Lady Spins the Blues, with live musicians like Sarah Baker.

Whenever the local scene finds itself in the doldrums, Mississippi bluesmen come to the rescue. For his own blues fix, Bowker travels to Mississippi twice a year. He always comes home rejuvenated, and he always brings the blues back to the North Bay. “This year’s festival at Lagunitas will take listeners on a journey across the South, up Highway 61 to the Bay Area and the whole world,” he tells me. “People who come will be treated to a decidedly Mississippi feeling they won’t soon forget.”