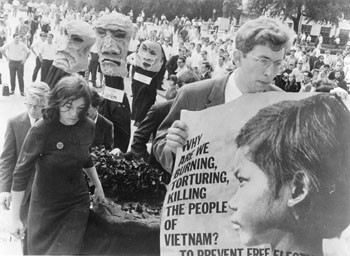 ‘Rebels with a Cause’

Rebels with a Cause.

HELEN GARVY was a young rebel the last time she stood in this part of downtown Oakland. That was 31 years ago. She’s a bit older now, and perhaps a bit wiser, but Garvy is still a rebel. And sometimes–today, for instance, back in Oakland to revisit a painful, powerful memory–she still gets angry.

Dressed for warmth against the February wind, the filmmaker stands near the corner of Clay and 16th, attempting to summon a vision of these streets as they looked on Friday, Oct. 20, 1969.

That was the day a band of antiwar activists, Garvy among them, temporarily shut down the Oakland Army Induction Center with a loud protest against America’s seemingly unstoppable Vietnam War machine. Only a few days before, in the very same spot, a baton-wielding squad of sheriffs and police officers had attacked protesters during an antiwar peace march, beating demonstrators until they scattered.

“I was furious,” recalls Garvy, 58, her voice dropping to a whisper. “We were all so angry by what happened in Oakland. We’d seen police violence at protests in the South, but this was the first time we’d ever seen that kind of violence here.”

All these events are captured in Rebels with a Cause, Garvy’s documentary film about Students for a Democratic Society (screening Feb. 23 and 24 at the Sonoma Film Institute).

Back then, however, Garvy was working as a schoolteacher in San Francisco. She was also an activist and an early member of SDS, which organized the Oakland protest. That Friday, Garvy joined a second, even larger protest march, and this time the marchers were prepared, protected by motorcycle helmets and hard hats. The police attacked anyway, but anticipating the police tactics, the protesters used cars and flower planters to barricade the intersections. This time they succeeded, taking the streets of Oakland and shutting down the U.S. Army–for one day.

But what a day.

THIS MORNING, Garvy can find few signs that any of it happened. “Nothing is recognizable,” she murmurs, gazing up and down the street. “I don’t remember exactly where anything was. Of course, in a situation like that, you don’t really pay attention to landmarks.”

Now standing in the spot where Garvy guesses the Induction Center was–“The building was nothing much to look at, that’s all I remember,” she says–is the Elihu M. Harris State Building, an attractive, glass, stone, and steel structure that was opened about three years ago.

Ironically, just inside the building’s main lobby is a conspicuous sign directing police officers upstairs for “Use of Force Training.”

Back on the street, Garvy points to a nearby street light, allowing that it might be one she climbed up to get a better view of the area and to scout the scene for the presence of police. “There were so many people, you didn’t know what was happening even half a block ahead,” she recalls. “And if you were like me, you were terrified.”

Our history books offer few references to such significant events of the 1960s. In order to preserve those stories, Garvy, who lives in Santa Cruz, has spent the last five years making Rebels with a Cause, a remarkable oral-history documentary that chronicles the actions of SDS.

Among the most influential student groups of the 20th century, SDS at the height of its strength had more than 100,000 members on campuses from coast to coast, organizing to fight for civil rights, free speech, women’s rights, and the anti-apartheid movement, and to call for an end to the war in Vietnam.

The film features dozens of interviews with the group’s members, ranging from Tom Hayden to the late Carolyn Craven. Mingled with archival footage, newspaper clippings, and startling FBI documents that target SDS leaders, Rebels masterfully blends its individual storytellers, cutting from person to person–often in mid-sentence–in a way that suggests a group of people so closely connected they can finish one another’s thoughts.

“We would do that, back in the ’60s,” says Garvy, smiling. “We would finish each other’s sentences. In a lot of ways, the movement was one big long dialogue.”

In part, Garvy made the film to counter the widely held opinion that the ’60s were mainly about sex, drugs, and rock and roll, and that the idealistic social movements of the era were a failure. That’s a view, says Garvy, that breaks her heart–and can’t be supported by the facts.

“We did make a difference,” she says. “Yes, we had setback after setback, and frustration after frustration. It took years to end the war–and it was the Vietnamese who did that–and every little victory along the way took incredible effort.

“But look around,” she continues. “The world is a better place because of the people who put their lives on the line in the ’60s.”

Garvy’s film has already changed a few minds. After one screening, a young black woman approached Garvy and thanked her. “She thanked us for making things better for her,” Garvy says. “She said she’d always taken it for granted that people made sacrifices so she can be a little better off than she would have been.”

Garvy hopes the film also touches those who were a part of the movement.

“There are people who lost their hope back then,” she says, “people who’ve been hurt and disappointed and embarrassed to talk about what they did in the ’60s because everyone keeps saying we failed.

“I hope they see this film and finally get to say to themselves, ‘Oh my god. It wasn’t all for nothing,’ ” she says. “We really did make a difference. We really did help change the world.”