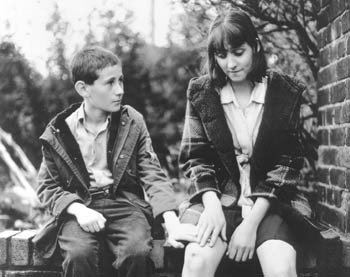 Hell is for children in compelling ‘Ratcatcher’

“MY MUM says this place is a very-mental-health hazard,” says one child to another as he surveys the garbage-choked yard of the condemned housing project they call home. It’s ’70s-era Glasglow at the height of the famed garbage strike. In this sorry corner of the earth, the vermin outnumber the populace–and the rats probably eat better as well.

Ratcatcher, UK director Lynne Ramsay’s mesmerizing feature film debut, paints a devastating portrait of one boy’s impoverished life as it aimlessly drifts from bad to worse. Shot mainly in cool blues tones, the episodically structured film is saturated with a dank and bitter hopelessness that moves purposely toward a frank conclusion that would never see the light of day on a Hollywood film set.

Unlike the young hero of the highly overpraised, paint-by-numbers tearjerker Billy Elliot, 12-year-old James Gillespie (William Eadie) is leading a life that’s unlikely to take him much farther down the lane, let alone over the rainbow.

He lives one step above squalor in a tiny apartment with his drunk-and-on-the-dole dad, his long-suffering mum, and his two sisters. It’s a hand-to-mouth existence, but somehow there’s always enough money for liquor and cigarettes, even if that means hiding from the landlord and letting the children suffer in outgrown shoes.

School’s out for the summer, so James spends his days playing in and around the polluted, trash-strewn canal near his home. In these bleak surroundings, the mountains of rubbish and the murky water serve as both playground and swimming pool to a group of lice-ridden, grubby imps, and sadistic toughs so downtrodden that they might have sprung from Dickens’ inkwell.

One morning, some horseplay between James and his best friend, Ryan, ends in disaster, with the younger boy drowning. Terrified, James flees the scene. The secret weighs on him terribly, but his remote, erratic behavior goes unnoticed by a family consumed with simply surviving.

Distraction comes in the form of a masochistic and pitifully myopic neighborhood girl (Leanne Mullen), whose chief form of entertainment is to allow a group of neighborhood bullies to use her as sperm depository. Presumably it’s the only attention Margaret gets, as her parents are rarely at home. It’s a disturbing but utterly believable scenario made more poignant by the fact that the girl is quite pretty–only she doesn’t know it yet. In the same way that dogs smell fear, her tormentors sense her insecurity and recognize her loneliness and use those weaknesses against her.

James, a sexual innocent, finds solace and an almost maternal fascination in her naked form. Goaded by the others into laying atop her semi-clad body, he finds comfort, not arousal, in her Madonna-like embrace. Ramsey breaks up the desolation with several small magic moments like this.

Particularly memorable is one in which a pet mouse is carried skyward by a balloon. As James watches the slow ascent, his envy of the animal’s escape is palpable, despite his knowledge that the mouse will likely perish.

Eades’ angular face, alert eyes, and milk-pitcher ears serve him well in an often silent performance. Considering the dour tone of Ramsey’s film, it’s a good bet that the director cast him for his low cuteness quotient.

Ratcatcher is not without flaws. In her quest to avoid sentimentality, Ramsey has left a few too many questions unanswered. Of course, poverty is too complex a social ill to explain in 90 minutes, though Brit social realist filmmaker Ken Loach has made a career out of trying, with mostly strong results.

“What doesn’t kill you makes you stronger,” wrote Nietzsche. It’s a homily tailor-made for children like James–if only they all lived long enough to appreciate it.