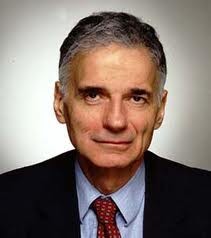 Ralph Nader to Speak at SSU on Oct. 4

Love him or hate him—or still blame him for the kinda-election of George W. Bush—the legendary Ralph Nader is coming to Sonoma State University on Tuesday, Oct. 4 to speak to students and the public alike.

Nader recently released his first novel, Only the Super-Rich Can Save Us. His speaking topic at SSU? “Fixing Our Broken Economy.”

I’d expect a lot of suggestions for taxing the rich, possibly including visual graphs that look like this—a clear picture of our nation’s debt and the wars and policies enacted by George W. Bush that got us there.

What I wouldn’t expect? Comments like those on election night 2008, when he speculated on-air, without hesitation, if President Obama was going to be “Uncle Sam for the people of this country, or Uncle Tom for the giant corporations.”