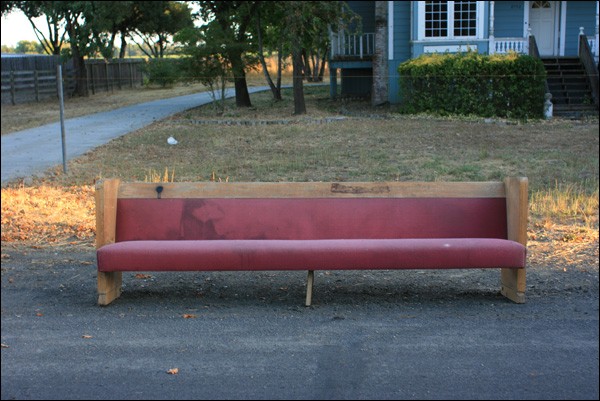 If You’ve Ever Wanted 14 Pews From the Luther Burbank Center, Today’s Your Lucky Day

So there I was, driving along Guerneville Road today, when out the corner of my eye I spotted a most unmistakable artifact. In fact, I flipped a U-turn in the middle of rush-hour traffic. I grabbed my camera. I needed proof.

There, on the side of the road, was a pew from the Luther Burbank Center.

For those who might not know, the Luther Burbank Center, now known to the general chagrin of longtime locals as the Wells Fargo Center, famously hosted many a world-class band, singer, comedian or dance troupe while the audience sat in . . . church pews. It wasn’t a design choice on the venue’s part, but simply a leftover from the theater’s former life as a chapel known as the Christian Life Center. In the 80s and 90s, it was near-impossible to see a show at the Luther Burbank Center without the headliner cracking a joke about being in church.

The pews were replaced in 2000, but they have been known to turn up in unlikely places. A couple years after the pews were torn out, I was working a construction job with my dad in Bennett Valley. There, where some of the sheetrock guys sat and ate lunch each day, was a pew from the LBC. (Even weirder was that the donor’s plaque still glued to it belonged to my best friend’s parents; I scraped it off and dropped it in the mail to them.)

I haven’t seen any of the pews since, so imagine my surprise upon finding this one, pictured above. No sooner did I snap a photo than the owner came running out of his front door. “If you want more of those,” he hollered, “I’ve got 14 more out back! They were here when we moved in, and I’m just trying to get rid of ’em.”

If—like me—owning a pew from the Luther Burbank Center sounds like your idea of personal fulfillment, you’re in luck! The house is right next to Tillman’s German Automotive, on Guerneville Road between Fulton and Willowside. To pick up your pew, I’m guessing you could just knock on the door, or, as the guy told me today, “just leave a note in the mailbox.”

My dream is that someone will take all 14 pews, set up a mini-LBC in their backyard and re-enact a complete Michael Franks performance from 1985. If that happens, be sure to invite me, okay?