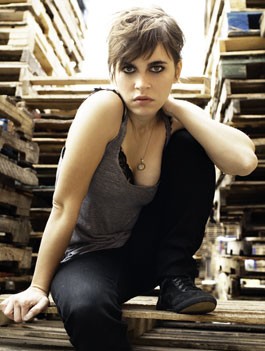 High off the energy of a successful European tour, a stage-igniting performance on Jimmy Fallon and heading toward a performance at the Cat’s Cradle in North Carolina—which, according to afternoon tweets, will feature a guest appearance by John Darnielle of the Mountain Goats—Kaki King is moving at light speed toward rock-god status. Well, OK. Maybe more like tour-van speed.

Actually, since King was voted one of Rolling Stone‘s “Guitar Gods” in 2006—the only woman to make the list—she’s technically already arrived. Next stop, Rock and Roll Hall of Fame?

King stops by the Mystic Theatre on May 20 in support of her latest album, Junior, which teems with vibrant, angsty pop songs, punctuated by epic washes of guitar and layered vocal choruses. From the blazing opening track “The Betrayer” to instrumental songs like “My Nerves That Committed Suicide,” the album rises and plummets from quiet intensity to towering energy. Tight guitar melodies build to anthemic bridges, the kind that get stuck in one’s head for days—like versions of “Tom Sawyer” for a new millennium.

“I’m a huge fan of Rush. It’s so cool to hear that,” says King. “That big, epic, delayed sound. Even on [2006’s] Until We Felt Red I did a song called ‘Jessica’ that had a lot of that vibe to it. I’ve had a lot of anthemic songs. That’s been a running trend in my records for quite some time.”

The release of Junior marks a new phase in King’s approach to musicianship. This is the first time she has recorded an album, as well as toured, with other band members. Previously, the 30-year-old has played all instruments herself and worked with producers to craft ideas into songs. Lush, driving songs like “Gay Sons of Lesbian Mothers,” a sparkling instrumental track off Until We Felt Red—produced by John McEntire (Tortoise, Stereolab)—have resulted from these sessions. For this latest effort, King recruited multi-instrumentalist Dan Brantigan and drummer Jordan Perlson to help in the songwriting process. King came into practices with rough song sketches, and her band mates helped flesh them out. The result, King says, is an album with rawer intensity and few overdubs.

“We already had a basic palette to work from, as opposed to creating everything from scratch, and that was a lot easier for me, as opposed to other records where I was scared off by that process,” she says. “It’s a much more basic album than anything I’ve done in the past, which is why I named it Junior.” In another switch, the fiercely independent musician has moved away from the finger-tapping and slapping guitar percussion that she has been lauded for in the past, although fans will be happy to know that, during live performances, she still delves into the fretboard tricks that first brought her attention. King gets bristly when asked whether anyone has expressed disappointment in her move toward more conventional styles of playing and away from tapping and hammering.

“Out of five records, I’ve only written about six songs that incorporate that technique,” she schools. “Maybe 10 percent have anything to do with that style. So it’s frustrating. Sure it was important to my career in the beginning, but it’s been three records since that haven’t had anything to do with that. I’m still trying to convince journalists to open up their minds and go, ‘Wow, maybe she’s not some one-trick pony.'”

But when asked about her gear, King—who was nominated for a Golden Globe in 2007 for her contributions to the Into the Wild soundtrack—loosens up, happily describing a litany of pedals used for live performances—Boss DD3, octave, tremolo, volume pedal for swells, loop station—and the shockingly versatile tiny guitar with which she took the stage for the recent Fallon performance. With a laugh, King describes the instrument as a “bad-ass-motherfucker ukulele.”

Onstage, King is a petite woman with a tiny guitar, but her sound is massive—augmented now by Brantigan’s thick, MIDI-controlled bass. Playing as a three-piece has clearly excited King with additional possibilities, and seems to have opened up horizons previously impossible to achieve playing as a solo artist. With a new band, King is a consummate musician on the road to legendhood—even when traveling along at tour-van speed.