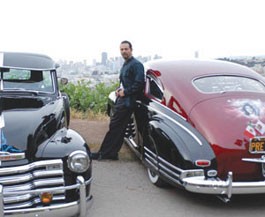 City by the Bay

La Mission is a simple story of the rough-hewn Che (Benjamin Bratt), a Muni conductor and ex-con who’s single-parenting his son, Jesse (Jeremy Ray Valdez). What he doesn’t know is that Jesse has a secret life—and a boyfriend who lives in St. Francis Wood. Che’s rage at his son’s sexuality is tempered by the attentions of his lovely new neighbor, Lena (Erika Alexander).

Director Peter Bratt and brother Benjamin have been San Franciscans and movie fans all their lives. In a recent interview, Benjamin told the Bohemian that Peter had created “a metaphorical low-rider cruise” through the Mission to match Che’s arc. “What happens sets him on a spiritual journey to get in touch with the divine feminine principle,” Peter adds.

Benjamin comments, “We tried to make Che one of those heroes we have come to revere in cinema, compelling and attractive in that kick-ass way of taking care of business, [but] what really makes him tick? What we discover is that for Che it’s love, not just for his son but for his community.” The problems of making La Mission included a small ($2.5 million) budget and a film industry that believed that releasing Brokeback Mountain meant never having to deal with gay hatred again.

“Then came Proposition 8,” Peter says. “Latinos and other minorities turned out to vote against gay marriage in record numbers. When we started working on this film, with homeboys and lowriders alike, we ran into homophobia.”

The film is a celebration of San Francisco. Problem is, San Francisco is still a city. La Mission is a kind of overexemplified view of San Francisco as a city of healing and refuge: a vision of a place where everyone is wounded and almost everyone heals each other.