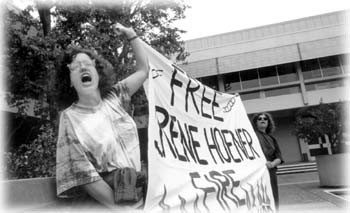 A LANGUID GRAY Monday morning at the rose garden outside the Sonoma County sheriff’s offices is abruptly shattered by the cacophony of a dozen piercing whistles and noisemakers. Two large banners are unfurled. Suddenly, louder still, the voices of some 15 women–aged teens to 60-plus–erupt in a chorus of whooping and singing.

“I don’t know but I’ve been told/ Sheriff’s Department is mighty cold./ Women here ain’t got a chance/ When those guys do their hateful dance,” chant the members of the Purple Berets, a local women’s activist group led by Tanya Brannan. The group is out to “blow the whistle on the Sheriff’s Department for its treatment of women in this county,” she says.

A fervent Brannan checks off a list of reasons for the demonstration:

First, free Irene Hoener–the wife of Sheriff’s Department sexual assault detective Ed Hoener–an ex-sheriff’s dispatcher who on July 9 held a gun to her head and threatened to commit suicide at the sheriff’s dispatch center. She was subsequently incarcerated, was denied a meeting with her counsel, and is awaiting charges. The Purple Berets want Hoener freed or at least transferred to a mental health facility, rather than remaining in the county jail.

Second, investigate the circumstances surrounding the death of Joanie Holmes, 35, who died in custody in early June just two days after being booked into the Sonoma County Jail and reportedly after being denied medical help.

Third, fire Sheriff’s Capt. Casey Howard, head of the patrol division and former head of internal investigations. He was arrested June 8 on suspected felony drunken driving after running over his wife’s head following a night of partying with fellow law enforcement officers in Marin County. He reportedly failed a breath test, but was allowed to return to work two days later, charged with a misdemeanor.

Finally, the Purple Berets are demanding that Acting Sheriff Jim Piccinini step down and that the Board of Supervisors appoint a law enforcement official from outside the county as acting sheriff until the next election in 1998. Piccinini didn’t respond to phone calls this week.

“That’s unlikely to happen,” says county supervisor Mike Reilly. “We’ve not sensed a groundswell of support to topple that department. If there is sufficient public interest in making a change, the public can vote on it.”

The July 28 demonstration was just the latest confrontation in an ongoing battle between local women’s rights advocates and Sheriff’s Department officials, who have been criticized during the past couple of years for mishandling domestic violence, sexual assault, and child abuse cases. A recent Sonoma County grand jury report and a 1996 state attorney general’s investigation supported those allegations.

The Purple Berets say they will continue to make their grievances heard. “It’s time for the Board of Supervisors to appoint an outside sheriff to clean the place up,” says Brannan, and the women whoop their approval.

“I’m trying to show my daughter what’s going on,” says Linda Purrington of Parents for Title IX, who is participating with her daughter Cheyenne, 14. “How women are treated in the system.”

Branka Thompson agrees, saying she has “lots of anger” about the system. “There’s no justice, nobody cares,” she complains.

During the demonstration, the women march, singing and handing out 500 fliers about the incidents. At one point, they enter the Sheriff’s Department offices, still singing, and are quickly hustled out by two sheriff’s deputies. “Can you go outside to do this so we can conduct business?” asks one deputy.

Later, about a dozen members of Purple Berets sit in court to demonstrate support for Irene Hoener during her scheduled preliminary hearing. Hoener, shackled at the waist–a thin and pale figure with thick dark hair and glasses–appears dazed by the court proceedings. After some discussion, the preliminary hearing is continued until Aug. 25.

Faux, who recently got the case, says he is concerned that although Hoener is observed and monitored in jail, it is not a full mental health facility. “No actual treatment is provided in limbo status,” says Faux, adding that Hoener’s husband has not contacted him.

Brannan is angry about the tight security measures she observed in the courtroom. “Why do you need seven bailiffs for a 90-pound woman?” she asks. “And [Hoener] looks overmedicated. This woman is being held at her husband’s jail instead of a mental health facility. It’s just despicable.”

Brannan, a member also of the Coalition Organizing for Police Accountability in Sonoma County, says that that ad hoc group continues to consider the possibility of creating a citizens’ police review board in the wake of several recent cases in which suspects have died or suffered severe injuries after confrontations with local law enforcement officials.

She says the first meeting drew 100 people. “They’ve divided into three work groups,” explains Brannan. “One to investigate the different citizens’ review models, one to organize the community to build consensus, and one to investigate and provide support to families of victims.”

“I’m concerned on many levels for the safety of women, the mentally ill, drug addicts. I’m shocked about the amount of apathy about police ineffectiveness,” says Cynthia Ott, who moved to Sonoma County from Oakland in January, and is one of several organizers hoping to start a citizens’ police review board locally.

“We want to get something going that’s palatable for the average Sonoma County resident,” she says.