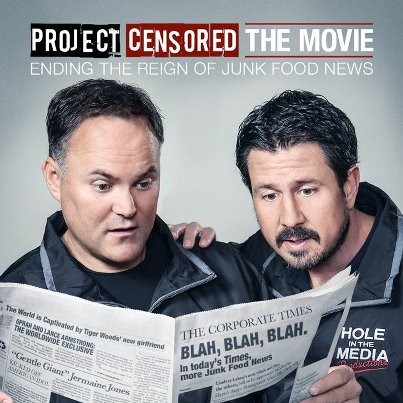 The 16th Annual Sonoma International Film Festival was host to a bevy of films, and one, Project Censored: The Movie, may be the most important film I’ve seen in terms of inspiring media consumers to seek outlets that speak the truth.

If you know about Project Censored, you’re probably not surprised that I am a fan. For those unfamiliar, it is a nonprofit located at Sonoma State University whose mission is to “teach students and the public about the role of a free press in a free society — and to tell the news that didn’t make the news and why.” Each year, Project Censored publishes a book of the 25 “top censored stories and media analysis.” The stories are collected by students and faculty and are vetted by media professionals.

Project Censored was founded in 1976 by Carl Jensen and was housed in the Sociology Department at Sonoma State University until it spun off and became its own nonprofit, the Media Freedom Foundation. This allowed Project Censored to be more autonomous and to reach out to other schools across the country in order to have a wider net with which to catch untold stories.

Project Censored: The Movie is directed by Doug Hecker, a former participant in Project Censored, and Christopher Oscar. In it, the two attempt to answer the question: “What will it take to end the reign of corporate media’s junk food news?” The night the film premiered at the Sonoma festival, 200 people were turned away. There was an additional showing later in the weekend, and a third showing was added at 9 p.m. Sunday night to accommodate the crowds.

Hecker and Oscar’s inspiration to make the film stemmed from their role as fathers, and wanting to leave behind a news legacy worth something. They talk about “junk-food news” and why corporate media fails to report the truth. Interviews with Howard Zinn, Oliver Stone, Noam Chomsky, Michael Parenti, Daniel Ellsberg and Dan Rather, among others, are eye-opening, particularly to the uninformed media consumer.

Khalil Bendib, a political cartoonist, talks about the top-down structure of the news and how corporate ownership hides the truth.

My personal hope is that this film is widely distributed. It seems to me that often, films like this are only seen by people who already know the problems, and simply preach to the choir. If this film is seen by many, it could shed some light in otherwise dark corners of reality and inspire people to take a more active role in their news consumption.

When asked to reflect on the role of the alternative media, Bendib says, “I would compare it to oxygen, really.”