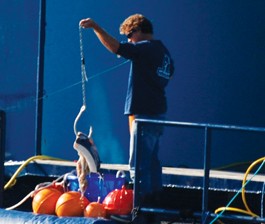 SEA CURVE Blubber is attached to a large hook to lure the great whites before they are boated and tagged. The first fish caught reportedly couldn’t breathe for eight minutes during the procedure.

The controversial shark-tagging project launched Thursday, Oct. 29, at the Farallon Islands and reported on in last week’s Bohemian got off to a rocky start, according to sources. While witnesses watched with binoculars and telescopes from the Farallon Islands, a team of scientists with government research permits hooked, landed, tagged and released a 13-foot great white shark which, according to sources, appeared to be bleeding from its rear vent, or cloaca, during the procedure.

Researcher Dr. Michael Domeier, president of San Diego’s Marine Conservation Science Institute (MCSI), caught the animal using marine mammal blubber for bait and a hook the size of a large U-lock. The intention was to hook the fish in the mouth, pull it aboard a platform next to the vessel, bolt a specialized SPOT (smart position or temperature transmitting) tag onto its dorsal fin, release the shark and repeat the procedure on up to nine more individuals, to be observed for years via satellite correspondence.

But the first operation didn’t quite go as planned, according to Maria Brown, superintendent of the Gulf of the Farallones National Marine Sanctuary. The shark, a male, swallowed the bait and was hooked deep in the throat, she says. Before its release, the hook was cut, leaving the business end lodged in the fish’s throat tissue.

Mick Menigoz, captain of the great white cage-diving boat Superfish, spoke to witnesses who work on the islands. They told Menigoz that a buoy serving as a giant fishing bobber had become jammed in the animal’s mouth. After a 40-minute tussle at the end of the line, the researchers grappled with the shark, then onboard the floating platform, to remove the buoy from its jaws before they could place a hydrating hose in its mouth to direct seawater over its gills. But eight minutes passed in which the fish could not respirate, sources said. Once the water was flowing, nine more minutes passed while the team drilled a hole in the shark’s dorsal fin and bolted a SPOT tag in place.

To finally release the animal, witnesses said, the scientists had to insert a pair of large bolt cutters through the animal’s gill slits and into its throat cavity, and, through the force of three men, cut the giant hook. On Friday afternoon, Brown, concerned that the shark had been injured, suspended Domeier’s project, which had been permitted under the agreement that it would be halted if a shark suffered injury during handling. Brown, Domeier’s team, and government observers who had watched the procedure met over the weekend. They reviewed video footage and determined that the shark was not internally bleeding and that a shallow flesh wound had been the source of the blood reported by witnesses. Brown gave Domeier the go-ahead to resume fishing on Monday.

Menigoz, with a boatload of shark-viewing clients, was nearby that day and watched as Domeier’s team pulled in a 14.5-footer.

“This time it went well,” Menigoz says. “It was hooked in the mouth, where it was supposed to be hooked.”

The shark reportedly spent 12 minutes onboard the platform with a hose running water over its gills the entire time as the MCSI team bolted on the transmitter.

“And with a little nudge, it swam away again,” Menigoz says.

Yet he and other critics continue to question whether subjecting great white sharks to such stress is ethically appropriate or scientifically responsible. Dr. Pete Klimley, a professor of marine sciences at UC Davis, points out that other tagging techniques already in use by white shark researchers in California are far less invasive, stressful and violent.

“They just use a seal-shaped decoy to bring the sharks to the surface and a piece of bait on a rope to lure them to the boat,” says Klimley.

Sean Van Sommeran, an independent Santa Cruz researcher with the Pelagic Shark Research Foundation, has been tagging white sharks for more than 15 years in California using a hand-held lance to prick each animal in the back, leaving a transmitter lodged in the hide. He is baffled that the government bodies that placed a moratorium on great white shark fishing in state waters in 1994 would allow a scientist to hook the animals and pull them onboard a vessel.

“If you were to hook a protected species of two-ton marine mammal and drag it onboard a boat, people would go through the roof.”

Anyway, Van Sommeran doubts that the results to be gained by Domeier’s techniques will reflect natural shark behavior.

“Speaking facetiously, I might call his study ‘Flight Behavior of White Shark with a Barbed Hook in Its Gut.'”

Brown says that the shark caught and released by Domeier on Thursday is still swimming. Great white sharks are negatively buoyant and will sink if they cease to swim. But on Monday night, the SPOT tag broke the surface of the Pacific Ocean and sent a “ping” to a satellite above, Brown says.

“The shark,” she assures, “is still alive and well.”