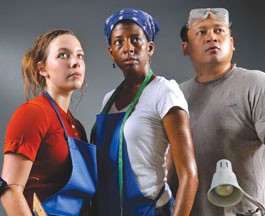 Power to the People

Michael Gene Sullivan spent his childhood being loud. Everyone who knew him swore he was destined for the theater. But when he reached his teenage years, he became incredibly shy. “I had the feeling that if I started talking, I would never shut up,” he grins. Luckily for intellectual theater enthusiasts, Sullivan, head writer for the San Francisco Mime Troupe (SFMT), did start talking again—and his prediction came true in the best way possible.

This summer’s SFMT production, Posibilidad, is the troupe’s 51st show. It tells the story of factory workers who accidentally take control of their company. Sullivan has devoted his latest in a long string of socially conscious productions to the plight of workers because he notices a discrepancy between American workers and their counterparts in such other countries as Argentina, a country that has a history of factory owners losing money and abandoning their companies. Once the owners are gone, the workers band together, purchase the company and run the thing themselves.

Growing up in an activist family from Detroit, Sullivan heard stories about his relatives’ frustrations with their auto-industry jobs. “There was always this sense that ‘we can’t do it ourselves, we need a boss,'” Sullivan remembers. “‘We need a hierarchy because otherwise how can we get a promotion?'”

Don’t be surprised if the idea smacks of socialism. Sullivan hopes audiences will leave the production free of the notion that socialism is a dirty word. “We, the working class, create the wealth of a country,” Sullivan says. “[The wealthy] can’t do it without us, but we need to show them that we can do it without them.”

In keeping with their socialist politics, even the construction of SFMT defies hierarchical categorization. Sullivan, who calls the troupe an “artistic collective,” also works as an actor and director. One of the company’s principal actors doubles as a booker. Wilma Bonet, the director of Posibilidad, began as an actress and still does both.

Bonet faced racial discrimination when a performing-arts high school rejected her application because of her Puerto Rican accent. How did that affect her approach to theater? “I don’t let anybody stop me,” she laughs. “I just look at it as people not understanding where I’m coming from. [But] everybody has a voice in the mime troupe.”

Social consciousness roared onto Bonet’s radar when she worked with a film crew documenting the Young Lords, a New York gang turned political activism group, marching in a parade. “I saw the charge of the NYC police brigade, and I thought, ‘Oh my God, I’m going to die,'” she says. “They started beating everyone up just for opening their flag. They didn’t care about the people who were watching the parade. My whole vision of how the police treated people totally changed.”

All of Bonet’s social rebellion is rooted in her reverence for artistic design. Years in art school instilled in her a passion for visual composition that transcends mediums (“Rembrandt,” she admires, “would just use light”); she applies painting techniques to the way she arranges her stage. Murals inspire her because their figures reach, point and gesture, guiding the eye in a static version of theater. “I paint live pictures onstage,” she says. “I’m very aware of color and timing. We don’t have lights [for outdoor productions], so I’m aware of where the focus needs to be so that the actor can lead the focus to what will happen next.”

The troupe’s penchant for relentlessly and artistically questioning the status quo draws North Bay audiences year after year. “It’s not silent mime,” Sullivan clarifies. “It’s just like a Broadway musical, but it’s smaller and has a point.” Earlier, he says, “I would like for [audience members] to establish a democratic workers’ state in two or three days,” Sullivan says. “But that’s probably not going to happen.”