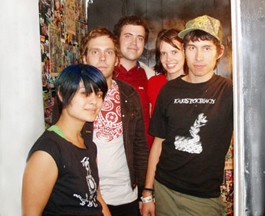 Lack of money is a central theme in The Prize Winner of Defiance, Ohio, the book and film about a struggling mother who composes commercial jingles to win contest money for her family. For the ebullient acoustic punk band Defiance, Ohio (from Bloomington, Ind.), lack of money is also a central theme—their noncommercial folk-punk jingles are designed staunchly against financial gain. They’ve turned the 21st-century inevitability of losing money as a musician into not only an art but an asset, and created a viable track where a basement full of people screaming along is far more valuable than any royalty check.

The things I remember most about seeing Defiance, Ohio two years ago at a garage in Arcata have less to do with their actual music, which was a blistering blur of sweat and screams, and more to do with their DIY, anti-capitalist ethic. Before their set, singer-guitarist Geoff Hing wrote in a hand-sewn tour journal made from ripped-up grocery bags, and afterward he split the tip jar equally with every other band on the bill. For years, the band has refused to sell CDs for more than $6, and all of their songs are downloadable for free under a Creative Commons license on Archive.org.

The bonus: their music’s great. “Folk-punk” as a genre has exploded in the last five years, and Defiance, Ohio is one of the scene’s most compelling and popular bands, shouting populist lyrics accompanied by a banjo, a cello and violin. “Petty Problems” is an expert sing-along about consumerism during wartime, and “Oh, Susquehanna” details the suburban tract-home existence perfectly: “The kids who populate these cul-de-sacs will never know what stood beneath those cookie-cutter houses: fields and streams and woods,” Hing sings. “They’ll sit in cars and wait for mom to drive them out of this boring neighborhood.”

Fans of the Andrew Jackson Jihad, early Against Me! or This Bike Is a Pipe Bomb will find much to love about Defiance, Ohio; they are at the forefront of a movement that lays to waste the notions that acoustic music necessitates wimpiness and that anger necessitates distortion. They bring their danceable revolution with handmade patches, low-cost albums and prizewinning anthems to town with Dichotomy, GRUK and Excuse the Blood on Sunday, April 5, at the Phoenix Theater, 201 E. Washington St., Petaluma. 8pm. $8. 707.762.3565.