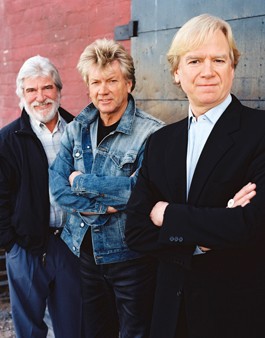 The dilemma,” muses Moody Blues guitarist Justin Hayward, “is not what we play; it’s what we leave out.” Indeed, with a back catalogue of a dozen mega-selling albums studded with myriad memorable songs and singles, the Moody Blues return to Santa Rosa on April with a four-decade history few bands can match—and a set list that is mostly mandatory.

“There are a lot of things we couldn’t get off stage without playing,” he continues, “and there’s only so much you can do in a two-hour show. More than that, I think people would start drifting off.”

But 41 years after the group’s Days of Future Passed album introduced and defined what has come to be known as “symphonic rock,” Hayward insists he never feels an urge to skip playing that record’s enduring signature song, “Nights in White Satin.” “No, no,” he says. “That’s a wonderful thing to be part of. It’s one of those songs that you can go most places in the world and play it, and people will know it and like it.”

With its lush orchestral interludes, solemn poetic passages and broad thematic concept, Days of Future Passed was a studio elaboration of the band’s stage show, tailored to their record company’s desire to showcase its new stereo capabilities. When the record found an enthusiastic audience, “that sort of dictated how the whole thing would go,” Hayward says. “We realized after the first album that it was an idea that really worked for us. We’d see the album as a whole, and even if we were just beginning it, you could see a plan for how we wanted it to be.”

After the band had cut their songs, the symphonic segments of Days were taped in a single three-hour session. “Time was very tight, and there’s still a part of the original recording where the studio cat ran though the orchestra and knocked a tree bell over,” Hayward says. “Arrangers over the years have faithfully reproduced the rather odd timing of that tree bell crashing, but it was never meant to be on the record.”

Faced with the daunting challenge of recreating the rich textures of their recordings on stage, founding keyboard player Mike Pinder turned to the Mellotron, a complicated, often temperamental instrument that played tape loops of strings and other orchestral timbres tuned to its keys. It could sound wonderful, but in practice the Mellotron was a “huge, unwieldy, heavy mechanical machine,” Hayward recalls. “And frequently going wrong. On the very first gig we did in America, at the Fillmore East in New York, it lasted about two songs, and the rest of it—I kept looking across, and it was Mike with his head in the back of the Mellotron with a coat hanger in his hand, trying to work it all out. It didn’t travel well, but it was certainly a big part of our sound.”

Modern synthesizers now handle all that the Mellotron did and more, enabling the current edition of the band—which now features just three of those famous five, Hayward, bassist John Lodge and drummer Graeme Edge—to replicate their well-known records more faithfully than was ever possible when they were new.

As much as he loves playing the classic Moodys material, Hayward hopes that a disc of new songs might still find favor, although he has tempered his expectations. “It can never be on the scale that it was before,” he acknowledges, “because the most valuable commodity in the whole music business is probably youth. And that’s the one thing you can never buy back.”

Regardless, he’s ready to carry on with the Moody Blues “as long as there’s somebody willing to buy a ticket.

“It’s all I’ve ever wanted, really, to be in a great band that does my songs well, and I can play with the other guys and do things they like, too,” Hayward says simply. “It’s just brilliant, and I couldn’t ask for more. It’s not something you’d want to readily give up.”