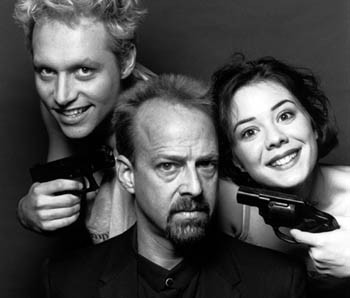 Rohnert Park-based Pacific Alliance Stage Company’s production of playwright Ben Elton’s Popcorn (directed by Michael Grice) has little pop but a lot of corn. A riff on Oliver Stone and Quentin Tarantino’s ill-fated 1994 collaboration Natural Born Killers (at odds with Stone, Tarantino later disowned the film), Popcorn explores what would happen if a couple, inspired by the fictional bullet-ballet flick Ordinary Americans, went on a murder spree that eventually ends at the film director’s Beverly Hills abode. Read: Irony with a capital Why.

Billed as a “comedy thriller,” the play provides laughs that are thin, but palatable, like rice paper. But the thrills pale in comparison to putting a raisin in one’s navel. Why a raisin? Hey, why this play?

One of the primary problems is that the play endeavors to indict the self-indictment of its source material–like slapping the hand that gives the proverbial slap on the wrist, then biting it because it fed them.

Are certain forms of entertainment (specifically those generated by the mythic Bitch Goddess of Hollywood) a sublimation of our wicked and never-to-be-realized desires or their very inspiration? Alas, it’s a question as old as the pay dirt from which it sprouted. As one character asks rhetorically, “Weren’t there any sickos before we had movies?” The answer is yes, though some would argue that now there are more–though they’re less creative.

A tepid Grand Guignol that frequently suffers from screen envy (the unfortunate attempt by some dramatists to import glitzy elements from the cinema into their productions), Popcorn is bloated with gun blasts, sound effects, and SWAT team ropes that drop from the ceiling. It’s all jarring, but not exciting. Of the central characters, James Arquin plays psycho du jour Wayne, though his lanky good looks make him seem more like a gun-toting Backstreet Boy.

Unable to disguise the fact that he is more intelligent than his role, Arquin employs a barrage of stage antics that serve only to remind that he is neither tough nor psychotic. For example, he is constantly chewing–what is he chewing? Apparently just the scenery. Arquin is more white noise than the white trash his character purports to be, though he is oddly likable–not compelling, but likable.

Laura Odeh, usually an intriguing actress, gets to aim low with Scout, Wayne’s wife and sidekick, and (wow!) hits her target. Apart from the inspired eerie giggle Scout emits whenever she is titillated by gore, Odeh is left with little room for invention. One waits for her talents to shine through, but the part is just too cartoonish.

Ken Sonkin, however, delivers a top-drawer performance as the conflicted film director Bruce Delamitri, your Type A Hollywood stereotype–crass, fast-talking, and ingeniously charismatic. Take a gander at Sonkin’s headshot hanging in the theater’s lobby and behold the striking physical transformation Sonkin undergoes for this part–peroxide, Van Dyke goatee, super tan. Sonkin’s performance is the only reason to see this living-history museum of mid-’90s American cinema.

The lesson of Popcorn is that Hollywood bashing should be left to Hollywood–they’ve got the budget for it. Moreover, if you want to be preached at, go to church.

Popcorn is a time capsule opened before it was ripe. Shelve it for 20 years and perhaps it will be relevant. Right now, you’re better off renting the movies from which it steals its shtick. They’re cheaper.