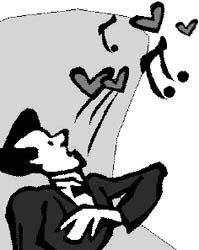 THE FIRST GIRL I ever fell for was Bonnie Burger, the ponytailed blond who sat in front of me in second grade. To my hyperactive 8-year-old mind, Bonnie was the most beautiful human to have graced the ever-shifting tectonic plates of the previously pathetic planet. For weeks, she was all I thought and dreamed about. I personally defaced at least a dozen desks with pocket-knifed inscriptions of her name, and lost my first fist-fight defending her honor after some Neanderthal fifth-grader dared to call her “Bonnie Booger.”

Then the beautiful Bonnie Burger moved to Georgia.

Thirty years later, I happened upon an old yearbook and found her picture, in all its pimply, buck-toothed glory. Yikes! Was I crazy? This was the girl I lost a tooth over? Now that I remember it, she didn’t even like me.

Well, it turns out that I may have actually been crazy.

A team of international biologists have published a study that may prove it. “Alteration of the Platelet Seratonin Transporter in Romantic Love” shows evidence that when human beings fall in love, their brains undergo a sharp 40 percent reduction of the chemical seratonin, the same 40 percent reduction observed in people with severe obsessive-compulsive disorder. In other words, falling in love really is like losing your mind–at least temporarily. OCD sufferers–Jack Nicholson played one in As Good as It Gets–become irrationally fixated on certain objects, activities, or persons. Humans in the early bloom of love become similarly fixated on the object of their desire, able to moon over them for disgustingly long periods of time and to perform extraordinarily bizarre acts–like spending 75 bucks for a dozen thorny red vegetables–in order to attract their paramour’s attention.

The authors of the study offer an explanation for this phenomenon that is, from a propagation of the species point of view, scientifically sound. “Without intense emotion,” says co-author Hagop Akiskal, “no one in their right mind would fall in love.”

Going nuts, then, is as vital to love and romance as candlelight dinners and engagement rings and legally binding marriage certificates. Probably even more so.

Therefore, as Feb. 14 approaches, with the heady weight of science behind me, I encourage you to get a little crazy this time. It’s good for you, and it’s good for the species. And Bonnie Burger, wherever you are, have a Happy Valentine’s Day.