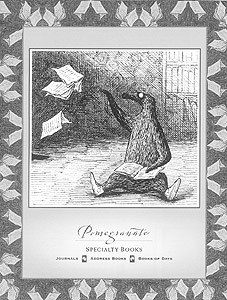 A GREEN-jacketed man offers a treat to an unimpressed dog calmly hovering upside-down in midair. A colonial gentleman, stoic and proud, stands before his latest invention, a freestanding, yard-long coil of processed meat. A seafood salad attacks a would-be gourmand. An imposing man casually removes his goatee.

It may come as a shock, but these bizarre visions of the imagination have something in common with the timeless architectural masterpieces of Frank Lloyd Wright. For that matter, they share something with M. C. Escher, Edward Gorey, Claude Monet, and Maxfield Parrish.

Strange, but true. These world-renowned artists, along with the floating dog and his oddball friends–which are the unmistakable ink drawings of British artist and author Glen Baxter–can all be found in beautifully rendered “coffee-table” books imprinted with the curious little name: Pomegranate. And they were all published in Sonoma County.

Pomegranate Communications, housed in an unimposing business complex in Rohnert Park, is one of the publishing world’s foremost, if unconventional, producers of quality art books–and ancillary merchandise (calendars, note cards, journals, and the like).

Pomegranate was founded 30 years ago by Thomas F. Burke, as a spinoff of his successful efforts printing and hawking psychedelic rock-concert posters at the Fillmore in the 1960s. With an optimistic enthusiasm that could have been born only of the hippie movement, Burke created a company devoted to creating altered states of the mind through the mesmerizing medium of art.

The success of Pomegranate lies in that enthusiasm, a passion shared by the world-class artists that the company is able to recruit. “Artists like to work with us,” says Katie Burke, Pomegranate’s publisher (and Thomas Burke’s wife). “We respect them, and they appreciate that.” For that matter, so do book buyers. Pomegranate’s insistence on quality and attention to detail, says Burke, “is the main focus of who we are. It’s our identity in the marketplace.”

That identity has lead to the company’s position as a primary publisher of books for museums. Pomegranate partners with such lofty names as the Smithsonian Institution, San Francisco Asian Art Museum, and Museum of the City of New York to produce numerous collections.

Given the luster of these associations, it’s a testament to Pomegranate’s versatility that it also published Steve Schaecher’s Outhouses by Famous Architects and Johnny Otis’ Red Beans and Rice and Other Rock and Roll Recipes. “We’re not a stodgy publishing house,” allows Burke with a laugh.

Though Pomegranate’s stable of artists includes such superstars as B. Kliban and the aforementioned Boulet–whose lush paintings of animal spirits and Earth goddesses are almost synonymous with the New Age movement–the company has always sought to find up-and-coming artists to present to the world. The fall catalog includes Gaiastar Mandalas: Ecstatic Visions of the Living Earth, by relatively unknown artists Bonnie Bell and David Todd.

“It’s harder in today’s marketplace to introduce contemporary artists,” Burke says. “There are fewer opportunities for unknown artists. But we will absolutely continue, whenever and however we can, to bring new artists to the world.”

Let’s hope that, as suggested by Glen Baxter’s floating dog and exploding fork–found in the brand-new Unhinged World of Glen Baxter–Pomegranate will also continue to give us the works of famous figures that we’ve somehow forgotten.

“Absolutely,” Burke insists. “We’re always asking ourselves, ‘What other cool stuff can we find and put out there into the world? Just for fun?’ ”