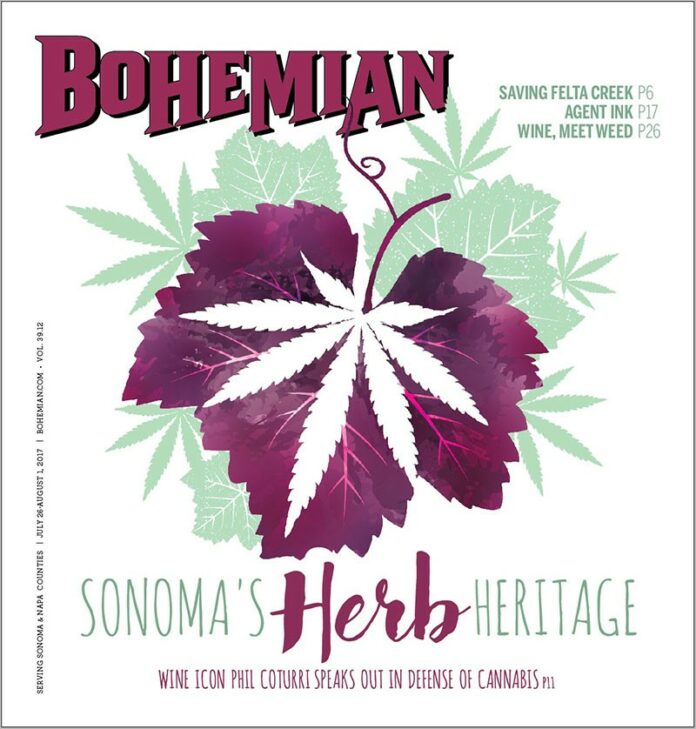 As a winemaker, sought-after vineyard manager, cannabis aficionado and Deadhead, Sonoma County’s Phil Coturri has loads of stories to tell about his long, strange trip. Or maybe it’s not so strange or so long, either. Indeed, in some ways it’s just getting going, especially now with the cannabis world in upheaval and with so-called experts mouthing off about the irreconcilable differences between wine and weed.

The founder and CEO of Enterprise Vineyard Management and the co-owner of Winery Sixteen 600, Coturri thinks that wine and weed are compatible in the field and on the dining room table. He’d like to see more pairing between the two, and with food as well.

Coturri is coming out of the cannabis closet to warn us all of the dangers ahead for the world of cannabis. Before it’s too late. Before the regulators destroy something valuable that has been shaped by growers and smokers, farmers and aficionados for the past half century.

Indeed, he has thought carefully about the repercussions of his words and his deeds. In his case, caution seems to have been the better part of wisdom. He hasn’t forgotten that cannabis is illegal under federal law and that Attorney General Jeff Sessions has put it near the top of his list of drugs to be eliminated.

I’ve known Coturri for years, not only as a grape grower and winemaker, but also as a cannabis connoisseur. I’ve previously written about him under pseudonyms. That’s the way he always wanted it. If he’s allowed his name to be used in print now, it’s because he recognizes that cannabis is in crisis and needs all the friends it can muster.

As a connoisseur of wine and weed, he’s worried that in the rush to legalize, regulate and normalize marijuana in California, the beauty of the plant and its aromatic flowers that he has known intimately since his college days at Sonoma State University will fall by the wayside. That’s why he’s coming out of the cannabis closet little by little, slowly and steadily. Indeed, he invited me to his office on First Street West in Sonoma, not far from the Plaza, because he wanted to sound an alarm, before the bureaucrats crush a whole way of life.

Coturri isn’t the only one to sound an alarm. All across Northern California, small growers share his fear that new rules will drive many of them out of business and hand the pot industry over to the big guys who have big money and who can afford to hire lawyers and consultants. Then, too, Coturri and his ilk argue, quality will suffer, as weed goes corporate and quantity soars. Some say the quality has already declined and that it’s essential to save the endangered world of boutique pot.

In some ways, Coturri seems like the last of the old school hippies. He grew up and came of age in the counterculture of the San Francisco Bay Area, which thrived on pot, protest and psychedelic rock.

Coturri arrives for our meeting right on time, smelling of the great outdoors and as fresh as one of the many vineyards he manages.

“Come springtime, vineyards take over my life,” he says. He wears glasses, a full beard, boots, shorts and a sweatshirt that reads: “Resist.” Indeed, he’s probably as much of a resister now as he was during the Vietnam War era, and as critical of Trump as he was of presidents Johnson and Nixon.

On the wall of the office are pictures of some of Coturri’s heroes: Janis Joplin, Beat poet Michael McClure, Jerry Garcia, Gary Snyder, the environmentalist and Pulitzer Prize winner, and Owsley Stanley, often described as “the King of LSD.”

Born into a working-class Italian-American family in San Francisco, Coturri is a product of the city’s bohemian and immigrant communities. His father and grandfather both made wine. His brother Tony makes wine. His sons Sam and Max also make wine. It’s in their blood. So, too, is THC.

“I’ve heard people describe cannabis as a threat to wine, but I definitely don’t see it that way,” Coturri says. “I think it’s time to emphasize the connoisseurs in both worlds—the people who are using both, not to get wasted, intoxicated and high just for the sake of getting high, but to appreciate the flavors, the taste and the aroma. In my world, they’re both familial—something to be shared with the whole extended family.”

Like many others who straddle the worlds of wine and weed, Coturri wonders how the Wine & Weed Symposium, taking place Thursday, Aug. 3, at the Hyatt Vineyard Creek in Santa Rosa, might open eyes and present new information. (See the Nugget, p26, for more.)

Meanwhile, he looks up at the photo of Gary Snyder. “We also need to remember the vital 50-year history of cannabis in our community here in Sonoma,” he says, “and remember that it’s an integral part of our values and our traditions. We have to keep it alive. It provides meaning to what we do and how we think and feel.”

Coturri began to smoke marijuana at the age of 14. (He dropped acid, he told me, before he began to experiment with pot.) He grew his first crop on Sonoma Mountain in 1978. All four of the pot plants in his tiny garden were stolen. Still, he wasn’t discouraged, in part because the California artist and longtime bohemian, Robert Pearson McChesney, showed him the marijuana that he grew in a greenhouse on Sonoma Mountain for his own personal use and the use of his friends.

McChesney was in his mid-60s; Coturri was in his 20s. “I was impressed,” he says. “McChesney built his own house with his own hands, and he cultivated his own weed. Now I’m worried that the cultural descendants of McChesney will have a hard time surviving in the new overly regulated world of marijuana. I want them to be protected. I also want the heritage strains to be protected.”

Still, Coturri says he understands some of the reasons why the industry is being so intensely regulated by the government, more than any other crop in California.

“Every Tom, Dick and Harry is growing pot,” he says. “For the most part, they don’t understand the complexities of the plant, or its medicinal and therapeutic properties.”

At the end of a hard day’s labor, Coturri likes to go into his greenhouse and putter with his pot plants as a way to relax, unwind and be at peace with himself and the world. “Marijuana is an amazing plant,” he says. “I enjoy watching the whole growing cycle, from the germination of the seeds to the flowering of the female plants. It has long been a passion of mine.”

This past April, the

New York Times published a couple of photos of Coturri. In one, he walks through a vineyard at Kamen Estate, which he manages; in the other, he’s in his greenhouse surrounded by marijuana starts. The article that accompanied the photos describes marijuana as Coturri’s “hobby.”

Maybe that’s the way it looks from New York. In Sonoma, it’s more like a quest for something that’s hard to define and difficult to pin down, but that adds zest to life. The Times article also claimed that Coturri was as “exalted locally” for his marijuana as he was “for his vineyard practices.” That’s an exaggeration, to say the least. As an icon of the organic and biodynamic California grape and wine industry, Coturri has mostly kept his cannabis connection under his hat and not advertised it.

As an undergraduate at SSU, Coturri read and wrote poetry. Back then, he would have liked nothing better than to be a poet like Gary Snyder, though he realized that he probably would not have been able to make a living writing verse. Still, his love of poetry hasn’t abandoned him and he hasn’t abandoned it.

“Once a poet always a poet,” he says. “I’m a poet in the vineyard and in the greenhouse, a poet with pot and with Pinot.”

Now, at the end of our conversation, he’s off to San Francisco with his wife to watch the new four-hour documentary about the Grateful Dead, Long Strange Trip. Coturri’s journey is clearly not over yet.