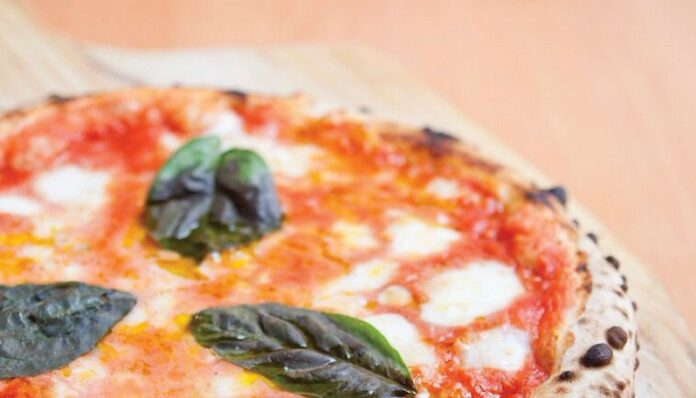 Walking into Persona Wood Fired Pizzeria, the new Neapolitan-style pizza place on Fourth Street in Santa Rosa, about 10 employees working behind the line swiveled their heads and loudly welcomed me with what sounded liked a management-decreed greeting. It was a little unnerving, but I got over it.

The restaurant, which replaced the late, great Arrigoni’s Deli, has a sleek, corporate look with its digital menus, employee T-shirts and well-branded décor. There’s also a digital soda fountain that dispenses about 150 different beverages. There’s beer and wine, too, but the options are much fewer.

Persona is the second restaurant by pizzaiolo Glenn Cybulski, winner of what I’m told are 112 culinary awards, including World Pizza Champion at the Citta Di Napoli world pizza competition in Naples, Italy. There are other locations in the works in South Carolina and Texas. So it’s fair to call it a chain, but it’s the pizza that matters and the pizza is good.

The pies are made assembly-line-style as you watch. The dough (gluten-free, if you must) is formed into a 12-inch disc, and the sauce of your choosing (marinara is good, but so is the chipotle) is deftly swirled on top with a ladle. The cheese (or no cheese, if you want) is added before your pizza slides down to the toppings guy. After that, the pizza goes into a beautiful wood-fired oven where it cooks for, oh, about two minutes. The well-blistered crust is perfectly formed and rather tall for Neapolitan-style. A basic pizza starts at $7.95. Add a pretty good caesar salad (skip the croutons) for $6, and you’re golden.