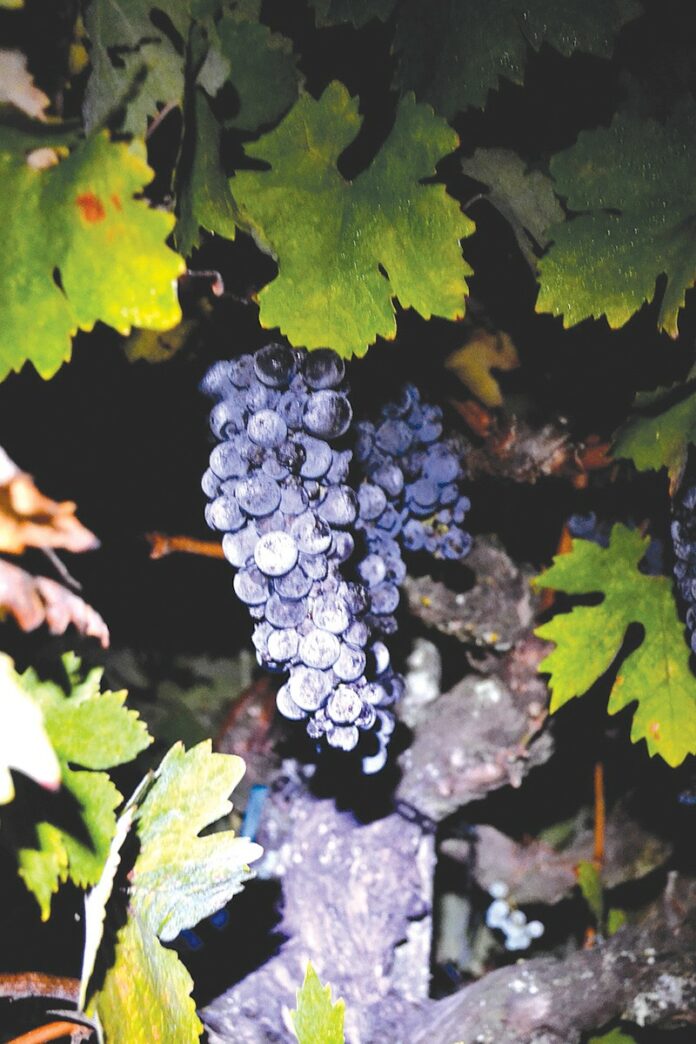 The 2015 vintage was already one of the earliest in memory. Pinot Noir was picked in July, and some wineries finished up Cabernet Sauvignon in mid-September. And then the region was hit with a five-day heatwave. Grapes are vanishing from vineyards overnight.

Once mainly the domain of sparkling wine producers, who need to bring in well-chilled grapes for their delicate wines, night picking is becoming the norm in many North Coast vineyards.

At Kick Ranch in eastern Santa Rosa, night harvest is the rule for whites like Sauvignon Blanc and Viognier, and also sturdy red varieties Mourvèdre and Petite Sirah. Many winemakers now employ a “cold soak” for all their reds: the crushed grapes steep in their juice for several days before fermentation starts. But if they’re too warm from the get-go, they’ll spontaneously ferment. Another benefit is getting grapes with a better balance of acid and sugar levels, which can fluctuate in the heat of the day.

The advantages of night picking are not limited to the winery, explains Kick’s vineyard manager Glenn Alexander, owner of Bacchus Vineyard Management. In a year like this, Alexander says, his crew prefers to work in the cool of the night. Today is an exception: they’ve been picking since 3am, but they got delayed at another vineyard, so harvest is still underway at Kick Ranch by the light of day.

Inspired by reports of heroic, all-night picks and vineyards lit up like cityscapes, I wanted to get in on some of this action. And I just happen to have a half-acre of Zinfandel grapes lying around that needs to be picked, pronto, and delivered nice and cool to the winemaker.

By 8:30pm, the grapes have already cooled, and I get to work. But instead of tractor-mounted overhead lights, an LED headlamp strapped to my head provides all the light I need and makes the bright, blue clusters of Zin easier to pick out against the backdrop of night, with only the occasional moth attempting to unite with my forehead.

Toward midnight, a silvery frosting of dew begins to make the grapes sparkle in the light. A big flock of geese passes overhead, noisy, but unseen. The sound of traffic on the highway quiets, and then there’s only the soft hoot-hoot of an owl.

A raspy bark pierces the night. I look up to see three pairs of gleaming eyes looking down at me. Again with the high-pitched, not quite doglike bark, as if saying: “Hey, you down there. What the hell is this?”

It seems that the night pick is nothing new to this vineyard.