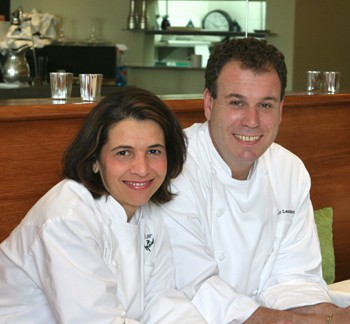 Pilar has an unwavering devotion to freshness

Midway through Pilar’s lunchtime crush, the evening’s dinner menu is still a bit nebulous–none of the staff is quite sure what it will be. “They let us know about 4:30pm,” says our waiter, not seeming overly concerned about the restaurant’s notoriously spontaneous menus. In fact, it’s become something of a comedy for early diners and eager food writers trying to describe the new restaurant’s food.

Carrot risotto? Mushroom soufflé? That’s so last week. Instead, Napa’s well-known chefs Pilar Sanchez and Didier Lenders like to keep everyone guessing, creating menus on the fly and switching ingredients and presentations not only daily, but sometimes even during the meal itself. Our waiter remembered that during the dinner service recently, the presentation of one dish transformed itself significantly, to his own confusion and that of a few surprised customers. Ah well, such is creativity. Unwilling to stifle inspiration, the changes aim for the better.

While such a mercurial menu might signal an undisciplined kitchen elsewhere, in the hands of Sanchez and Lenders, the evolution is quite intentional. The cohesiveness is not in the dishes but in Pilar’s unwavering dedication to freshness. Local or exotic, the menu is a living, breathing testament to these chefs’ ability to showcase the simple, unadulterated taste of the food itself. Nude food, you might say.

Though it remains to be seen whether the menu will continue to transform quite so rapidly or settle into a comfortable middle age with a handful of favorites, we’re hoping for the former.

Opened just last month in a tiny, narrow downtown space off Napa’s Main Street, Pilar’s food is described as contemporary Napa Valley-California, which of course could mean just about anything. Perhaps it’s best described as a mixture of classic French, Spanish and Italian, with a little Cali thrown in the mix.

Sanchez’s background in the wine fields of France, the kitchens of Mario Batali, her own Spanish heritage and most recently, her tenure at the Culinary Institute of America at Greystone, all merge harmoniously. Meanwhile, the décor of the restaurant reflects the simplicity of the food with earth tones, black-and-white trim and, as of this writing, no sign out front. A single banquette along one wall can make for close quarters during busy times but offers a good opportunity for checking out your neighbor’s dessert choices.

This early in the season, as anyone who’s been to the farmers market can attest, a reliable supply of any particular food can be a gamble. One week’s bumper crop of fava beans may lead to a fava crisis the next. By remaining flexible with its menus, Pilar allows for last-minute introductions of foods ready for their 15 minutes of seasonal fame. Right now, the spotlight is hogged by asparagus.

Though it may sound overly effusive, a chilled cup of soup ($6) featuring the speared veggie was the essence of spring. Cool and calming, with a wonderfully bright green color, the whole experience was like sipping an Alpine meadow. Each bite was grassy and vegetative with herby bites of chervil and sweet asparagus, creamy with flecks of crème fraîche and floral with the addition of orange peel. Yodel-lay-hee-hoo.

A duck confit rillette ($8) was equally simple and straightforward, paired with tiny cornichons and radishes. Nothing elaborate, just the slightly smoky, preserved duck matched with crisp, vinegary pickles and a pile of julienne spinach drizzled with olive oil and vinegar.

Grilled hanger steak, chilled spinach terrine and garlic herb potatoes ($16) had the same nude beauty. The steak, served medium rare, was meaty and juicy. The terrine was–and I hate to be so simplistic here–spinach-y. But it’s not often that you just taste a restaurant vegetable for what it is. The garlic-herb potatoes were thinly scalloped and packed neatly into a crisp, browned wedge. Though we were originally tempted to call it bland, we realized that with each bite, the pure essence of the food became more and more apparent. Maybe it’s the long-dormant winter palate, so accustomed to tasting heavy sauces and herbs in hearty winter fare, but this was clearly an awakening.

We also tried the grilled mahi mahi with chipotle barbecue sauce and grilled bok choy ($15), a light, fresh affair that was merely brushed with the smoky sauce and served unadorned, save for a few drops of olive oil. Rabbit, in the form of a chile poblano relleno ($13-$15), is served in a large grilled pepper, but presentation varied over three menus, once including rice and salsa, another time, cheese and eggs. Other entrées available for both lunch and dinner included pan-fried Boston mackerel ($14), steamed mussels with a garlic and herb cream sauce ($13) and a sweet rack of Colorado lamb ($25) that friends raved over.

Dessert may be the one relatively unvarying area of the menu. We tried a port poached pear zabaglione ($5) and got caught licking the plate. Twice. But it wasn’t our fault: the zabaglione is thick and creamy with a perfectly cooked caramel flavor that matches well with the slightly too al dente pear. The baked chocolate mousse with vanilla ice cream and coffee crème anglaise ($5) had a different consistency than the rich, puddinglike stuff one might expect. The mousse at Pilar is more like a dense cake given a small crown of vanilla-flecked cream. The dark taste of the chocolate and coffee make for a rich, bittersweet experience.

The wine list entertains the reader by matching American (mostly Californian) wines side by side with comparable French wines, allowing some healthy head-to-head competition. At the suggestion of our waiter, we tried a super-fruity, super-floral Chilean Veramonte Sauvignon Blanc ($8 a glass) served chilled. Despite the frequent menu changes, our waitperson described the food and presentation perfectly and, like the rest of the staff, was eager and willing to accommodate.

By the time you read this, no doubt, the menu will have changed several times over, leaving diners to ponder an array of new choices. But that’s the beauty of bounty and a chef confident enough to let the food speak for itself.