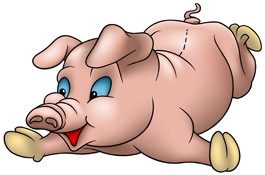 B acon-flavored lip balm. That’s what one company was handing out at the National Fancy Food Show last month in San Francisco. Also, bacon-flavored salt and baco-mayo, “because everything should taste like bacon.TM”

Apparently, the popularity of pork, which has been all the rage with foodies these past few years, hasn’t waned. Which is good news for Dry Creek Kitchen chef-owner Charlie Palmer, one of the most pork-centric chefs of them all. For the fourth year, he’s hosting his increasingly popular Pigs & Pinot festival in Healdsburg, which celebrates the beauty of porcine cuisine and the perfect wine for it, Pinot Noir.

Held March 20&–21 at Hotel Healdsburg, the festivities include the Pinot Cup, a competition of 50 labels from around the world, and the Ultimate Pinot Smackdown, which is sort of an amped-up time-share sales pitch from several sommeliers on their favorite Pinots; the sommelier with the best song and dance wins.

The kickoff is Friday night’s Taste of Pigs & Pinot, with a massive sampling of wines and piggy dishes from Palmer plus guest chefs like Michael Mina, Christopher Kostow (Meadowood) and a few European celebs. The events wrap up with a five-course feast at Palmer’s Dry Creek Kitchen.

There’s also a cooking class, Piggy Back, where Palmer will demonstrate how adding a layer of some type of pork to nearly anything makes it all that more delicious. His mantra: utilize every pig bit from snout to tail.

There is one part of the pork I haven’t tried, by the way, and don’t intend to: pig “milt” (which is a dodgy way of saying pig sperm). Yet there are indeed those who are eating it, and actually a cookbook dedicated to it, Natural Harvest, from www.lulu.com.