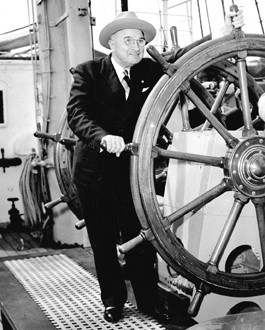 No Body Left Behind

The case for single-payer health in the North Bay

SHIP OF STATE: Harry S. Truman first proposed single-payer as a national health plan way back in 1948. Ever heard anyone accuse him of being a socialist?

Michael Kozart works the North Bay healthcare trenches. As medical director for the Santa Rosa Free Clinic, Kozart is accustomed to servicing the city’s hardcore homeless population. But with our downward spiraling economy, Kozart says he is witnessing a dramatic up-tick in demand for his clinic’s services. Notably, his clinic is being deluged by surprising demographic groups. “We’re getting lots of folks,” Kozart says, “hurt by the downturn who lost their jobs and need help. Our clinic is just bursting at the seams. We’re beyond capacity. We have to turn people away.”

President Harry Truman first proposed national health insurance back in 1948. He made the single-payer system a centerpiece of his “Fair Deal.” Yet more than six decades later, we still have no universal health system. Instead, America’s healthcare has devolved into a byzantine labyrinth of over 1,200 competing insurance companies, for-profit hospitals and pharmaceutical manufacturers whose profit margins outstrip even those of Big Oil.

What’s resulted are bloated industries run by obscenely overpaid corporate pashas, who, according to the Citizens Alliance for National Health Insurance, personally garner a good percentage of the $660 billion in annual profits their industry outfits shovel in, and who powerfully oppose developing anything akin to any demonstrably effective universal healthcare model such as those at work elsewhere throughout the world.

In gearing up for his futile run at the White House, Rudy Giuliani addressed fellow Republicans on the issue two years ago at a San Francisco fundraiser. Giuliani’s remarks were typical. “Democrats want universal healthcare, collective responsibility—honestly, it’s their version of socialized medicine.”

Dr. John Shearer has little patience with propaganda concerning single-payer healthcare. A recently retired family medicine doctor in Sonoma County and the immediate past president of the California Physician’s Alliance, Shearer formerly served as a volunteer physician at the Jewish Free Clinic, now located in Rohnert Park. He presently serves on its board of directors. For the past quarter century, Shearer and the organizations to which he belongs have been dedicated to reforming healthcare by promoting a single-payer system.

Shearer points out that a growing majority of Americans want single-payer health insurance, as do 59 percent of the nation’s physicians. He challenges Giuliani and his ilk to address the facts. “Single-payer is not socialized medicine. It is a universal healthcare system,” Shearer says, “publicly funded but privately provided. That is to say, physicians and hospitals are contractors to the system, but they remain in private practice and are not employed by the state. It is not socialized medicine.”

Shearer ticks off advantages to single-payer systems, including the affordability to individuals and enormous savings to society as a whole, free choice of physicians, universal coverage and the elimination of administrative duplication. Single-payer, as provided in both the National Health Insurance Act HR 676 as well as former California State Senator Sheila Kuehl’s twice governor-vetoed SB 840, is a universal system based on healthcare help rather than healthcare limitation and denial, with improved oversight and responsibility over a system that is now arbitrary, its decisions over life and death presently made in private with profit-making first and foremost.

Shearer notes that our nation spends far more on healthcare per capita than any other industrialized nation, while still not measuring up to even some Third World countries, never mind equaling our world financial competitors. To demonstrate this he cites the World Health Organization ranking America’s health system at number 37. That’s behind Morocco, Dominica and Costa Rica. And while we spend far more per capita for poor results, 47 million of our citizens are uninsured and perhaps an equal number do not carry adequate coverage.

Here in California, where the numbers of uninsured continue to soar, the governor has $669 million worth of healthcare on the chopping block. What’s to bounce back from D.C. with passage of a federal stimulus package isn’t clear. And how much of that stimulus will be devoted to healthcare is entirely conjecture. All that’s certain is the problem is worsening daily.

A healthcare forum addressing the single-payer issue, entitled New Opportunities for Solving the Health Car Crisis with a Single-Payer System, is on tap for Feb. 21. Dr. Shearer will moderate a panel that includes three other renowned experts and activists in the field.

Asked if a single-payer national healthcare system might address needs his Santa Rosa Free Clinic faces, Michael Kozart says, “Single-payer is everything we need. It is exactly what we need. I just don’t see any other way to achieve healthcare justice. It’s Economics 101. When there’s one buyer negotiating costs for everyone and everything, we all benefit.”