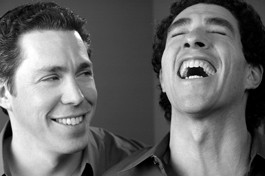 When one hears the words “classical” and “jazz” together in one breath, trepidation is natural despite a long history of genre cross-pollination among the two compatible suitors. Charlie Parker played Bartók; Charles Mingus idolized Richard Strauss; John Lewis loved Bach; Carter and Ives couldn’t help but be affected by Dixieland and bop. So why are more recent examples of the classical-jazz hybrid—Claude Bolling and Jean-Pierre Rampal, say—unnecessarily arty and emotionally unmoving?

Yet two brothers, Gregory and Garah Landes, make up an exciting cohesion called Synchronicity. Together on piano and percussion, they shatter the idea that improvisation and technique cannot coexist effectively. I don’t know what their impulses are or what they listen to in their spare time or if they think about pentatonic scales when playing. All I know is that their composition “Plead the Fifth,” though probably an in-joke on music theory, blows my mind.

Low, spidery lines fly across the piano while mallet drum rolls swell in the background—it’s Don Pullen or Marco Benevento with a slightly more delicate touch. In a quick crash, the drums charge in—all hyperfunk like Idris Muhammad on three cups of coffee—and the piano and drums line up for successive riffs in unison. It might be as out-there as Synchronicity gets (they also play “The Rite of Spring” and “One Hand, One Heart”), but it sure as hell claims victory over Suite for Flute and Jazz Piano.

The Brothers Landes have appeared at Carnegie Hall and Lincoln Center, and have been featured on NPR. Don’t miss ’em when they perform a program of Bartók, Bernstein and more on Saturday, Feb. 14, at the Occidental Community Church as part of the Redwood Arts Council series. Second St. at Church St., Occidental. 8:15pm. $10—$25. 707.874.1124.