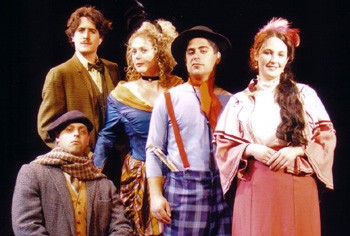 ‘Picasso at the Lapin Agile’

Playboys and Bunnies: SSU’s production takes a surrealist look at the what-ifs of a famous friendship.

Genius on the Rocks

‘Picasso has a lot of really interesting, really remarkable things to say about art and science and the 20th century,” says Sonoma State University professor Judy Navas. While it might be true that Pablo Picasso the artist had compelling opinions about art and science, the Picasso to which she refers is not the artist but the play Picasso at the Lapin Agile. Written by actor-comedian Steve Martin, the play–an off-Broadway hit from 1996–is set in a French tavern in Paris in 1904, and revolves around a chance meeting between a youthful Albert Einstein and a young, pre-Les Demoiselles D’Avignon Picasso. As viewed by Navas, who directs the play at SSU, the show is part philosophy, part visual surrealism and part wacky slapstick.

“For all of its intellectual word games and its delving into important ideas, it’s pretty hilarious,” Navas says. “The characters are delightful, and it’s really very accessible. It’s important to me that the audience is entertained, and this is a very entertaining show. Which is exactly what one would expect from a play written by the guy who starred in Planes, Trains and Automobiles.”

Working with a vibrant cast of students and nonstudents, Navas’ production makes clever use of the university’s versatile theater space, incorporating such visual effects as a large glass window on which Picasso and Einstein (and other characters) doodle and sketch their emerging ideas, and an enormous replica of a famous painting, which rises up, on cue, to hover above the Lapin Agile.

On a recent Sunday two weeks before opening, Navas admits she’s still tinkering with details. A 28-year veteran teacher at SSU, Navas has established herself as a fearless innovator with a fondness for experimental theater. She once produced a high-tech, computer-enhanced production of Shakespeare’s Tempest and created an original work for SSU titled Mythic Footprints, based on the writings and dreams of the legendary Sioux medicine man Black Elk.

Navas believes that Picasso at the Lapin Agile brings together most of the elements she finds compelling in a script–colorful characters, odd juxtapositions, challenging ideas and a willingness to break the “fourth wall” of theatrical disbelief, as when the characters accuse Einstein of appearing at the wrong point in the show and fetch a program from an audience member to show the sockless scientist where he was supposed to have made his entrance. The most intriguing thing about the show, Navas explains, is its examination of the creative process.

“It’s pretty miraculous,” she says, “making us laugh and think, while also making clear Martin’s thoughts on how ideas come to us. It’s also a very short play–75 minutes with no intermission–so it’s pretty fast and furious. It’s a challenge for the actors, because it’s also a very technically ambitious show, but I couldn’t be happier with how it’s all working out.”

Perhaps it’s a reflection of Navas’ years as a teacher, that in working to put her actors in the right frame of mind, she found herself assigning homework.

Says Navas, “My Picasso, a very talented actor named Damian Sagastume, was given a number of biographies to read, including Arianna Huffington’s bio [Picasso: Creator and Destroyer], and because Arianna is such a gossipy girl, we learned a lot of very interesting things, a lot about his love life, a lot of which we used to understand these characters.” For his part, Joshua Stithem, the actor playing Einstein, was instructed to watch Errol Morris’ documentary on Stephen Hawking, A Brief History of Time, and had to spend time reflecting on physicist Hawking’s, and on Einstein’s, deep sense of wonder about the universe.

“This play is about wonder, in part,” Navas says. “It’s about the nature of art and science, and how they can talk to each other, how they can both help us realize what we are about. It’s about genius, but it’s also about how it doesn’t take a genius to have a world-changing thought or make an extraordinary piece of art. We all have a little bit of Picasso and Einstein in us, somewhere.