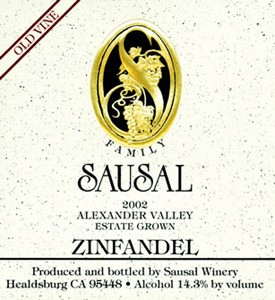 Lowdown: Driving into Sausal amidst wandering dogs, unfamiliar driveways that launch off in foreign directions and unfenced front yards with families watching you drive by, it’s easy to feel like you’ve taken a wrong turn and ended up in a remote country subdivision rather than a winery. There aren’t many signs or promotional hullabaloo directing you toward the tasting room. Rather, the cats greet you at the front steps, joined perhaps by a taster or two who arrived a few minutes earlier and staked out the lone picnic table.

Sausal’s the kind of quintessential family-run operation that’s been in the business for generations, creating simple, everyday wine for simple, everyday folks. It’s a nice, off-the-beaten path detour that harks back to a long-lost time when wines were made for family and friends‹not mass produced for an international palate. Plus, you can pet the kitties.

Mouth value: When wine comes with a disclaimer, as was the case with the 2002 Sausal Blanc ($7), it’s best to pass. Described by the staff as being for “people who don’t like reds,” it was almost an apology. Stick with what Sausal does best: Zinfandel. The nonvintage Cellar Cats Red ($12) is an agreeable picnic sort of wine dedicated to the tasting room’s beloved felines. Most of the other Zinfandels we tasted, mostly ’02 vintages ranging from ($18 to $26), were all a bit tight, but they had nice characteristics of mineral and briar that made for approachable, if not always outstanding, wines.

Don’t miss: The family’s patriarch, Abele Ferrari, held the patents to a number of winemaking machines, including a stem crusher he manufactured in Healdsburg. You can see diagrams and copies of the patents in the tasting room.