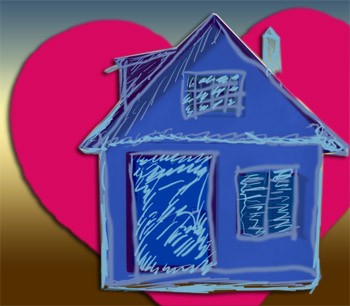 Loads of Potential: Men might come and go, but a house is forever.

I Married My House

Adventures in real estate and romance

When I was in my 30s, I fell in love. Of course, it was not the first time it had happened, but this fellow was the first one, even at my advanced age, that I could imagine doing all the “grown up” things with, if one defines grown up as getting married, buying a house and starting a family. Happily, he too could imagine it, so on New Year’s Day, during the El Niño floods of 1997, we dodged breaking dykes in the Central Valley as we sped to Yosemite to stand under an umbrella on the top of a rock to be joined in matrimony by the cowboy-boot-wearing Pastor John Paris, a romantic name, I felt, and one that boded well.

There are little water spots on some of the photos of this elopement, and they give the photos a prismy, ’60s-album-cover quality. Pastor Paris was the first to tell us that it’s “good luck to get married on a rainy day,” but he was not the last. Alas, he was wrong.

Perhaps our problem was not the rain, but the fact that we did everything in the “wrong” order. First, we tried to get pregnant, then we bought a house together, without having ever lived together, and then we got married. Oddly enough, the buying of the house proved to be the most traumatic and weighty of these three decisions.

It all had seemed like a swell idea. Fresh-faced, full of hope and in love, we had set forth in Berkeley to buy our first home and, by golly, we had enough for a down payment on a domicile that could cost as much as $180,000. Surely, we thought, a more-than-ample budget.

Almost immediately, we became well-acquainted with the phrases “Fixer-upper,” “Just needs some TLC,” “Will shine for the right owner,” “Loads of potential,” “Carpenter’s dream!” Our house was beginning to sound like the way a friend describes an unpopular kid in high school that she’s trying to fix up for a date. Rotting floorboards; abundant, giddy termites; crack dealers on the corner; bedrooms the size of a single bed; warped floorboards; mildew; trash in the streets–all of these were somehow summed up by our real estate agent in one word: “Character!”

Defeated and wondering if we should move to Kansas, we decided to give it a rest for a while. We still were not even living together; I was in Berkeley and he was in Sonoma, and I loved going to visit him up there on the weekends.

One Sunday, I grabbed the real estate section and looked at the North Bay listings. I own a business in Oakland, and it was sheer folly to even contemplate living so far away from my job. But there was one listing, right in Sonoma, with a pool and a third of an acre for $200,000. This is how warped buying a house here is, even in 1997: When the maximum you can afford is $180,000, you start thinking that $200,000 isn’t so much more.

“Let’s at least go look at it,” I urged. He thought I was not thinking things through, and of course he was right, but I took one look at the 40-year-old lilac bushes and the studio I could write in and the huge garage he could use as his shop and the view of Sonoma Mountain and the pool and the porches, and all logical thought took flight like the yellow finches chortling in a tree in the backyard. We sat by the pool holding hands, palms sweaty and hearts racing. “It’s crazy,” he said. “You’d be driving two hours a day for work! Right now you can walk to your shop.”

I look back on that decision now, to when our bond was strong and we were full of conviction that we could make anything work, and wonder if the repercussions of buying the house–all that time apart; my living essentially part-time where I worked and part-time with my husband; his feeling an ebbing desire to work on the place because that’s what he had to do all day at his job–contributed both to his decision to return to grad school and his realization that he didn’t really want to have children after all. Can a house do all that?

He’s moved on now, and I find myself a member of the growing ranks of a new real estate phenomenon: the single homeowner. Between 1994 and 2002, the number of single women owning homes climbed from 13.9 million to 17.5 million. And those are just the figures for singletons. Only 4.2 million divorcees owned homes in ’94 compared to 6 million now; there were 6.7 million widows owning then, close to 8 million now. I guess we female homeowners are a force to be reckoned with. Still, there is the pesky fallout of that accomplishment: isolation.

Given that one in five homes bought today is purchased by a single woman, and given that she has only one income, it must be assumed that these figures are referring to first-time female buyers of homes in suburban, family-oriented communities. There is even an alarming blog site concerning the influx of single women in such communities, where they are seen as being somehow threatening to the neighborhood. “They want our husbands and babies!” one poster wailed, to which a single woman paying her own mortgage retorted, “It’s more like we don’t want to rent.”

Statistics reckon that in order to own a home, many people in the Bay Area commute up to four hours. The average median price for a home in 2005 in any of the nine Bay Area counties is $556,000, more than half a million dollars for a single-family home, not a mansion. The average price in 1995 was $293,000, still no white elephant sale.

Furthermore, committing to homemaking alone crimps one’s style romantically. Days off are often spent engrossed in such activities as mowing. Sometimes it feels as if everyone in the town of Sonoma has married their high school sweethearts, and the grocery story is a sort of constant class reunion. Everything closes around 8:30pm. “That’s why they call it Slownoma,” jokes another divorced friend who is devoted to her house.

Six months after my divorce, I began dating Daniel, but since his daughter was moving out to attend college, and since he had no desire to go back to renting, he found that for $30,000 he could own a wee house with some woods around it in a depressed logging town in Southern Washington. He seems convinced that the influx of people his age in the same position as himself will transform his town into a thriving, arty community, despite an abundance of churches and taverns and a distinct dearth of cafes. Personally, I get listless when too many days pass without sunshine. We cross state lines now and then to have reunions and share our tales of home improvement, but neither of us is likely to change our address.

Given how much of my heart and soul I have put into my little home over the past eight years, I guess I should just face facts: I have married my house. But with all the flux of the Bay Area, all the moving and juggling and comings and goings dictated by relationships and income and jobs, maybe having a haven, a comfortable shelter that is the one constant in one’s life, isn’t such a bad thing. Maybe I’m part of a phenomenon that reflects some sage observation Katherine Hepburn made years ago: The best way for two people in love to live together is as neighbors.