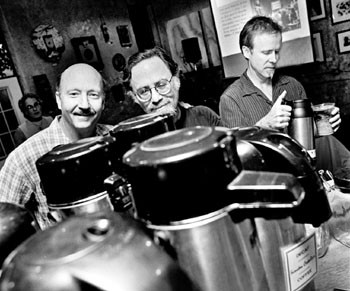 The Petaluma Coffee Cafe’s seats fill up fast. Patrons arm themselves with their chai or nonfat decaf latte or mocha, and scan the room for an open seat. On this Friday night, the opening night of the Petaluma Film Series’ fourth season, seats are hard to come by. The highly coveted couch up front is taken quickly, errant stools and low tables are co-opted for buttocks, and as the sun sets and the film starts–the Thich Nhat Hanh documentary Peace Is Every Step–people are even standing outside the cafe’s big open windows, and they remain there for the duration of the film.

Every Friday night during the season (which runs September through July), movieless Petaluma gets a movie. A collaboration between Sustainable Petaluma Network, Petaluma Progressives, and a group of independent filmmakers, the series has been showing films at locations in Petaluma since 1999. The series sprang from the imaginations of Sustainable Petaluma Network’s Beth Meredith and independent filmmaker John Bertucci, both of whom have moved on to other projects.

The Petaluma Film Series is now run by a cohort of volunteers from the three organizations, and each organization sponsors one film a month. Since Meredith phased out of the project in June, Karen Schell of Sustainable Petaluma Network has been choosing their films. Jonathan Blease and Peter deKramer choose the films for the Independent Filmmaker nights; Chuck Sher does the deed for Petaluma Progressives. The fourth (and, if there is one, fifth) Friday is left open for other groups.

“It’s really a great setup–an entire weekly film series, and each group only has to pick one film per month,” says Schell, sitting at Petaluma Coffee Cafe with volunteer Paul Johnson a few weeks before this year’s series started.

“We started at city hall,” says Schell, “because it was the only place that had a projector and chairs.” The series moved on to the Petaluma Arts Council space next to Copperfield’s, until that was swallowed by the bookstore.

The series has been at the Petaluma Coffee Cafe since April, and organizers are pleased with the venue, though where to hold the series is “always a big issue. We really like this place, but we’re always hoping something will pop up. In our ideal world, we’d find a downtown venue accessible to the public,” says Schell.

Schell adds, “We’re hoping to get enough of a crowd that we have to find a new place.” If the overflowing Sept. 13 showing is indicative of this season’s appeal, a new venue is necessary.

Like the series put on by New College and the Sonoma Film Institute, the Petaluma Film Series showcases a carefully selected batch of films that aim for an edifying, entertaining experience. The goal in booking the films, according to Johnson and Schell, is to “mix it up a bit.”

Schell puts great stock in the diversity of the series ensured by having three different groups choose the films.

Past seasons have seen screenings of Green Design: The Next Industrial Revolution; Oil, Drugs, and the Future of Afghanistan; and Cocteau’s Beauty and the Beast. The Petaluma Arts Council, which has shown The Passion of Joan of Arc, often takes advantage of the fourth open Friday, though others have participated also.

“It’s a good way for a random group to plug into an established series,” says Schell, and it also helps to ensure that treasured diversity.

In the coming weeks, the series tackles everything from visual art to medicinal plants. On Sept. 27, SPN screens Fat of the Land: Biodiesel as an Alternative Fuel, which follows two women and their French-fry-fat-fueled car, exploring along the way the viability of alternative fuels.

Oct. 4 brings an Independent Filmmaker offering, Isamu Noguchi: Stones and Paper. The film’s director, Hiro Narita, will be on hand for this discussion. The film documents sculptor and designer Isamu Noguchi–he of the ubiquitous paper Akari lanterns.

The series continues with a film that screened in the Wine Country Film Festival (and was lent to SPN for the film series), called The Shaman’s Apprentice, a documentary about ancient healing wisdom.

The series is offered for free; a donation jar is passed around–a little nudge to give, “but not so [patrons] feel all weird about it,” according to Schell. The program runs with almost no expenses, although sometimes there are licensing fees for using the films. “But we do it anyway,” Schell smiles.

Over its four seasons, the series has managed to acquire its own chairs and sound system, and a new projector is in the works. “We’re digging into our pockets and hoping to recoup the expenses,” says Schell.

A significant part of the allure of the series is the discussions that usually follow. Though the filmmaker of Peace is Every Step could not make it to the recent screening, people lingered after the film ended, talking and sipping their coffee.

Many of the screenings do have a filmmaker or local expert to expound on the film, making the experience that much more valuable. As Schell says, “At most theaters, there isn’t that option.”

It’s certainly not a multiplex experience–and in theaterless Petaluma, the comparison must be drawn. The Petaluma Film Series doesn’t take the place of a movie theater, and it doesn’t aspire to mass market appeal.

The Petaluma Film Series screens films on Friday nights at 7:30 at the Petaluma Coffee Cafe, Second and H streets, Petaluma. See the website for the full schedule: www.sustainablepetaluma.net/filmseries.html.