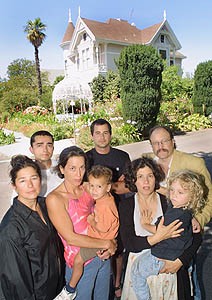 BY NOW it’s pretty clear how Sonoma County activists would block the use of pesticide spraying during a potential glassy-winged sharpshooter infestation–they’d fight back. Before reaching a recent agreement with grape growers and county officials, the Occidental-based No-Spray Action Network conducted civil disobedience-training classes and lobbied nearby city councils to adopt no-spray resolutions.

But what about activists in neighboring Napa County? Environmentalists there seem to be taking a more subdued approach to resisting the possibility of forced spraying on neighborhoods, and opponents appear less vocal than their politically active Sonoma County counterparts.

“We’re quite different from Sonoma County, our communities are different,” explains Lowell Downey, spokesman of the Napa-based POISON (People Opposed to Insecticide Spraying on Neighborhoods), an ad-hoc group that formed last November in response to the state control program that requested that each county come up with a work plan to control the glassy-winged sharpshooter and the vine-killing disease it carries.

“Sonoma County has a university and a history of activism in towns like Sebastopol, but that doesn’t mean people in Napa County aren’t willing to consider civil disobedience.”

Chris Malan, who is active with both Friends of the Napa River and POISON, agrees. “People here are ready to engage in passive resistance if necessary,” she avers.

Malan says more education is necessary for residents to understand the potential problems of chemical drift from vineyards to neighborhoods. “People need to be aware that the pesticide doesn’t just get on the leaf; it goes for miles and lingers in the atmosphere for a very long time,” she warns.

BESIDES pushing for a no-forced-spraying provision in the Napa County GWSS-control plan, POISON wants areas bordering schools, hospitals, and other sensitive places to be off limits to pesticides. “The most important aspect of our work right now is to encourage and support the creation of alternative methods to eradicate or control the glassy-winged sharpshooter,” says Downey.

Among such alternatives are many of those adopted in the Sonoma County compromise, including vacuuming, handpicking the pest off the leaves, using beneficial insects to control the pest, and using registered organic insecticides and repellents.

“We are under no illusion that we can take forced pesticide spraying out of the work plan. We can, however, build a case for alternative use and make it a viable alternative, and give people a choice,” says Downey. “People do not have a choice without the alternatives being available. I think part of the method of the state is to keep alternatives out of the equation.”

POISON has worked with Napa County Agricultural Commissioner Dave Whitmer to put new language into the Napa County work plan that would give the public alternatives to spraying that Whitmer submitted to the state on July 1. However, the commissioner has said that any changes to the county control plan would need state approval, and the no-spray effort could be largely moot if the state uses its authority to bypass local ordinances during an infestation.

In addition, Downey says, the commissioner has asked him to research and locate alternative pest-control companies in the area, of which there are very few. “So far, I have only found one in Petaluma,” he says. “There seem to be none in Napa County.”

Even so, Downey is planning a September forum for local farmers and the public on alternative pest-control education. “We have to look at our options to eradicate this, and then we can go on to use these techniques in the neighborhoods,” he explains.

THERE APPEARS to be plenty of concern about the increased spraying. A petition circulated by POISON in St. Helena netted 300 signatures, most of them from Latina women. “These women live on or near the ranches and are coming forward to say they have had health problems with children and with carrying babies to term, and believe that exposure to pesticides has caused them tremendous harm,” says Downey. “And there are a lot more people out there who are afraid to come forward because of legal ramifications.”

Downey admits that the county will be under a lot of pressure to spray. “Wine is a $4 billion industry here in Napa [County],” he says. “That’s what we’re faced with, but the public shouldn’t be victim to forced spraying and people need to be taught what the ramifications and alternatives are.”

One thing is clear, adds Downey. The age-old rivalry between the wine-producing regions of Sonoma and Napa counties could be laid to rest a little, at least during this potential time of crisis.

“If Sonoma County is hit [with forced spraying] first, Napa County people will come and help and vice-versa,” he says. “The boundaries are shifting because of this, and the two counties are becoming more linked and supportive of each other.”