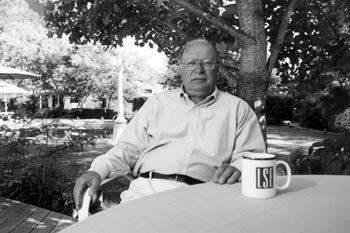 WHEN PAUL ERDMAN begins working on a novel, he focuses on setting and plot. The characters come later. “I never write about a place unless I’ve been there,” says the financial guru-turned-novelist, back at his Healdsburg home following a month of research in Central Asia for a work in progress. His new focus: the resource-rich Caspian Sea basin, a global hot spot in more ways than one.

“You don’t go to a place like that for pleasure. It can be as hot as 125 degrees. The air-conditioned hotels aren’t very air-conditioned,” Erdman says. “And the food–it’s bloody miserable,” he adds, dropping a hint of his British background.

Good stories are filled with conflict and contrast, and Erdman, who has authored nine novels, digs for his tales in the desolate sands of countries like Uzbekistan, where the oil is rich and plentiful. Experts believe the region holds 50 percent more oil than the combined proven reserves of the Americas, Western Europe, Africa, and Asia.

“There’s a huge geopolitical power vacuum there now,” Erdman says of the region that includes countries that aren’t exactly household names yet, such as Kazakhstan, Turkmenistan, and Azerbaijan. “It’s strategically important because, at some point, whoever controls the region will control the oil.”

The global powers, not surprisingly, are lurking. The boundaries of Russia, Pakistan, Iraq, Iran, and Turkey practically merge in the area. China is not far off. The U.S. presence is huge. For instance, “Chevron has committed about $6 billion to the area,” says Erdman, who produces, along with his fiction, a steady stream of financial analyses for all kinds of media.

Erdman traveled extensively around the Caspian basin in July, often with a hired car and driver. This kind of down-in-the-trenches research, though often dangerous, can inspire scenes filled with gritty detail and realism.

“My main character needs to get into Uzbekistan, and I was looking for how and where he’d do that,” he says. “We were near the Afghanistan border, driving on a crazy road, when a series of semis from Iran rolled by. They wouldn’t tell me what they were carrying. But that’s when I realized that could be a great way to get the character into the country.”

Erdman recently decided the story could best be told in first-person narration. In past novels, he’s used the third-person and has mixed the narrative voices. The 66-year-old author admits characterization isn’t his strength.

“I’m more of a plot guy,” he said. “The plot and the place come first. Then the characters usually develop as I tell the story.”

His eclectic background no doubt comes in handy. If he hasn’t lived in an area, he’s probably traveled there. Born to American parents in Ontario, Canada, Erdman has resided in England and Switzerland. He’s maintained a Northern California residence since 1973, moving up the coast from San Francisco to Marin to Healdsburg.

In his novel The Set-Up (St. Martin’s Press, 1997), the action jumps from San Francisco to Switzerland, from Sardinia to Alaska. The characters include shifty brokers, shady bankers, and crooked lawyers. There’s also a wonderfully realistic description of a Swiss jail, another result of first-person research–this time unplanned. Erdman spent time in a Basel jail in the ’70s while authorities investigated a commodities trading scandal. It was nine months before his innocence was established and he was released.

Some people have been known to confuse Erdman’s financial analysis with his fiction. Though his commentary What’s Next?: How to Prepare Yourself for the Crash of ’89 shouldn’t be read the same way as his novel Panic of ’89 (St. Martin’s Press, 1989), some of his fans believe his fiction offers more insight into the complex workings of the global economy than most non-fiction analyses.

Erdman does much of his writing in the early morning before his phone begins to ring. (It’s been ringing quite a bit more since the recent wild swings in the stock market put bearish views back in fashion.) He recently hooked up with CBS MarketWatch on the Internet, where he vents his views on the volatile financial markets. He’s on radio and TV and in newspapers and magazines all over the world. His work has even made it to the silver screen: One of his nine novels, The Silver Bears, was turned into a movie starring Michael Caine.

Though he insists he’s a “postulator” rather than a prognosticator, his fiction has been known to become reality. One of his novels, The Swiss Account (Tor Books, 1993), had a remarkable impact on the real world.

“It was a historical novel set in World War II and involved Swiss bankers cooperating with the Nazis,” Erdman says. The story, accompanied by historical footnotes, helped generate widespread interest in the issue that eventually culminated in a billion-dollar settlement to Holocaust victims and their heirs.

What other weighty matters is the former banker pondering as the millennium approaches? He believes the new European currency is doomed (he’s writing a piece for Time magazine entitled “The Demise of the Euro”), and he thinks the Y2K computer problem won’t be nearly as serious as many believe.

Another area that he’s following closely is medicine. “There’s a revolution coming in the medical field and you can already see it happening,” he said. “Lives are being extended by decades. Who’s going to support them?”

Maybe he’ll let us know in a future novel.