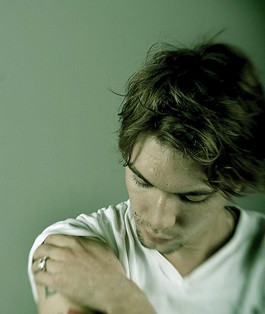 There was no huge domestic musical upbringing that turned Steve Earle into an alt-country-rock maverick. His big early influence was a nonfamilial mentor, the legendary songwriter Townes Van Zandt. But Earle’s present-day family sure does take a fancy to country roots and indie style. His sister Stacey Earle and wife Allison Moorer both have their own recording and touring careers, and now son Justin Townes Earle (above) is on tour supporting his own self-produced, folksy debut EP Yuma.

The younger Earle may seem like a chip off the old man’s acoustic-but-tough block, but father and son are quite different. Justin’s smooth, unhurried vocals contrast with dad’s persistent rugged drawl, while Steve’s political outspokenness is apparently not a gene that got passed down. Earle Jr. instead writes softer, simpler portraits that often have the feel and structure of old-time parlor music. The lilting “You Can’t Leave” would make a sweet album track for any classic or current country act.

Justin’s songwriting is still in a formative stage; Yuma‘s title track tells a sad modern suicide tale that shoots for sympathy, yet the young writer stalls in his role as observer. Justin also shows little need for dad’s hard-rocking eclecticism. His MySpace page conspicuously lists the Replacements, Tom Waits and Elvis Costello as influences ahead of dad, but Yuma is entirely a solo acoustic work. Expect a bigger chip off the old block when it’s time for Justin’s full-length debut.

Steve Earle may have taken cues from Justin on his latest disc, Washington Square Serenade. Compared to his usual standards, the disc is drastically less topical, largely less incisive and rocking, though no less questing and varied. After releasing nearly an album per year since emerging from rehab in 1994 (a stretch that many critics and fans believe holds his best work), Earle took a few years off to marry Moorer and enjoy the domestic bliss heard on new songs like “Days Aren’t Long Enough” and “Sparkle and Shine.” Even the gospel-shuffle “Jericho Road,” which promises Earle’s classic human-interest deconstruction of America’s Middle East foibles, isn’t pointedly political.

Still, his edge is there in the hard urban folk-blues mix and in keen writing such as “Down Here Below,” where he imagines a hawk circling over midtown Manhattan to note that “all us mortals struggle so.” He later sings “When the war is over / And the union’s strong / I won’t sing no more angry songs,” no doubt wise enough to know that too much mellowing is premature.