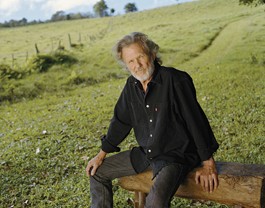 Nothing Left to Lose

Before anything else, there’s that voice. That sad, knowing timbre. A voice so hard and heavy, so gritted with experience, that Kris Kristofferson really only has to say one word to convey the wholeness of his being: “Hello.”

If there were a way to make his voice jump off the page, to make the world hear what it sounds like when Kristofferson picks up the phone and ekes out a wearily inviting “Hello,” then this whole column would be over right now. Everything that anyone needs to know about the singer, songwriter and actor is lingering in the rough edges of his 71-year-old voice: the weight of experience, the dedication of intent, the acceptance of the inevitable. And still, the trace of invitation, “Hello,” as in, “I have talked to a million people in my lifetime, but now I am talking to you and I want to hear want you have to say because we are both human beings and we are in this together.”

For proof, catch Kristofferson when he plays Napa’s Lincoln Theater on Oct. 21. Or pick up This Old Road, Kristofferson’s latest, which is the closest thing to being in a living room and hearing someone play songs just for you this side of Johnny Cash’s first American Recordings album. Stark, intimate and wholly mortal, it’s the honest representation of an honest man singing about life, love, the world and the war with a passion rarely evinced in people half his age. “Just me ‘n’ a guitar ‘n’ a harmonica,” he explains from his home in Hawaii, “and we did it in about an hour and a half, I promise you.”

An hour and a half. For an entire album. Unheard of.

There’s “Pilgrim’s Progress,” where Kristofferson wonders if he’s young enough to believe in revolution, “Wild American,” where he celebrates the outspokenness of Steve Earle, Waylon Jennings and John Trudell. Or the heaviest of all, “In the News,” a plea for peace that careens uncontrolled into a global outcry for the tragedy of war, even quoting God himself: “Not in my name, not on my ground / I want nothing but the ending of the war.”

“Since I’ve been writing songs, primarily for a livin,’ I’ve always just tried to be as honest as I can,” Kristofferson says, mindful of the division in country music over the Iraq War. “It’s made me hard to market in the country market sometimes, but I can’t really worry about alienation.

“If you have that position where you can affect people’s lives,” he continues, “I think it’s your responsibility to do it. Anyway, they haven’t got a whole lot of time to ruin my career. Because getting at this end of the road, I really feel like there’s very little to keep me from saying what I mean.”

Asked if he sees any foreseeable end to the Iraq War, Kristofferson immediately answers no. “I can’t see us getting out of this mess now,” he says. “We’ve become like the Romans or something—a little overextended in our empire. And, geez, we can never make it up to those people in Iraq. We did exactly the worst thing we could’ve done. There’s not a person who could say they’re better off today.”

It’s for stances like this that Kristofferson’s been saddled with labels like “Country Music’s Hippie” or the “Leftist Outlaw.” He laughs off such misfired descriptors, chalks them up to having a beard before it was acceptable in Nashville. Then, in a deep tone redolent of long, gnarled nights and too many memories, he lays out the way he’d actually like to be remembered.

“I would like to be thought of,” he intones, “as a creative human being. One who worked with the tools he was given, as well as he can, and followed his responsibilities on doing what he thinks is right.”

Kristofferson was born in 1936, and in his early life he played football, attended Oxford and flew helicopters for a living. He joined the Army, ascended to the rank of captain, and then resigned to focus on becoming a songwriter. His family thought he was crazy. He probably was.

Moving to Nashville, he got hired as the janitor for Columbia Studios when Bob Dylan was recording Blonde on Blonde. “He sat at the piano all by himself,” Kristofferson recalls, having watched through the windows the night Dylan came up with the 11-minute “Sad-Eyed Lady of the Lowlands,” “in the biggest empty studio they had there at Columbia, with his dark glasses, and he would write on that song all night long . . . it was incredible.” As the peon doing cleanup, Kristofferson says that he would never have bothered Dylan, and the two didn’t speak through the entire session.

Johnny Cash must have been more approachable, because between emptying ashtrays and moving microphones, Kristofferson pitched songs to Cash in the studio hallways. After looking up his home address, he even flew his helicopter into Cash’s yard to hand the Man in Black some fresh demo tapes. Eventually one of them stuck: “Sunday Mornin’ Comin’ Down,” a lonesome narrative of getting through a strung-out day.

It started a long, close friendship between the two as they both struggled with the renegade life, the country-music establishment and the missteps they took around each other. “I did things that I’m sure pissed Johnny Cash off,” Kristofferson says without elaborating, “but still, he defended me in a country magazine that had devoted almost a whole issue to what a bad representative of country music I was.”

Cash was right, at least in chart terms. “Sunday Mornin’ Comin’ Down” hit No. 1, and Kristofferson’s songs have now been recorded by over 500 musicians, many of them huge hits: “Help Me Make It Through the Night,” “For the Good Times” and “Me and Bobby McGee,” best known as a posthumous hit for Janis Joplin. Kristofferson and Joplin dated until her untimely death in 1970. He swears he never gets tired of performing the song, adding that “by the time I get to the end, I’m thinking a lot about Janis. And I’m thinking, now, how freedom is just another word for nothin’ left to lose.

“There is a freedom in accepting the fact that there is a difference at this end of the road,” he says. “I’ve watched a lot of my friends and heroes, like Johnny Cash and Waylon, I’ve watched ’em slip and fall. And be gone. And it’s gonna happen to all of us. So I think the acceptance of it gives you a freedom to be less critical of yourself when you make mistakes and to not be so hard on others.”